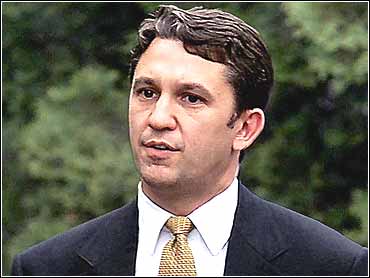 Republican candidate Rick Lazio, in a fund-raising letter that came to light Wednesday, says his U.S. Senate rival "Hillary Clinton and her husband have embarrassed our country and disgraced their powerful posts."

In his harshest attack to date on the first lady, the congressman from Long Island writes that "she covets power and control and thinks she should be dictating how other people run their lives."

"No other Senate hopeful enjoys a liberal national press that hangs on her every word and treats her never-ending soap opera of scandals as 'irrelevant' and 'yesterday's news,' " the four-page letter adds.

Asked about the Lazio letter, Clinton campaign spokesman Howard Wolfson said, "We are confident that New Yorkers will reject Rick Lazio's campaign of personal insults in favor of Hillary's campaign of issue differences and real ideas."

Meanwhile, declaring that Lazio's candidacy is the product of "Republican Party kingmakers," the first lady was out with her own direct-mail appeal asking for "a special donation" to keep up her attacks on the congressman from Long Island.

"Our opponents understand how critical the next few weeks will be in defining this contest. So do I," the first lady wrote in a one-page appeal.

Just last month, Clinton and her supporters launched six television advertisements attacking Lazio's congressional record and his stand on issues in an attempt to "define" him for the electorate before he has a chance to do that in a more positive way.

Lazio only entered the race on May 20 after Mayor Rudolph Giuliani quit the contest, saying he had to deal with his newly diagnosed prostate cancer. Lazio's substitute candidacy was quickly endorsed by Gov. George Pataki and state GOP Chairman William Powers, who effectively shut the door on other possible GOP contenders.

In her letter, Clinton reiterates her public theme that "this campaign is not about me or my opponent." She then quickly makes it clear she thinks the race is about her and her opponent, or at least where they stand on the issues.

"I support licensing and registration of handguns. He doesn't," she writes. "He has voted against the right to choose (abortion) for low income women, even in cases of rape and incest. I would never vote that way."

McLagan dismissed the letter as another example that the first lady's "campaign has been one of mudslinging distortions ... It's sad, but not unexpected."

Defending Lazio's letter, McLagan said, "There were never any unanswered questions surrounding Barbara Bush. There are no independent counsel reports on Rosalyn Carter. Under previous administrations, the Lincoln Bedroom wasn't treted like Motel 6."

Earlier, Lazio had said the race would not be about Bill Clinton or other politicians, but about he and the first lady.

The letters appeared as Clinton and Lazio were closing the books on their second-quarter reports to the Federal Election Commission.

On Friday, Clinton aides said she had raised $5.1 million over the last three months, bringing her total over the past year to almost $18 million. They said she had $6.4 million still on hand.

The Lazio campaign said he had raised more than $4.5 million since getting into the race to go with the $3.5 million he had earlier raised when he was preparing to run for the Senate until last year when Pataki convinced him to suspend his efforts in favor of Giuliani. Aides said Lazio had $5.4 million still on hand.