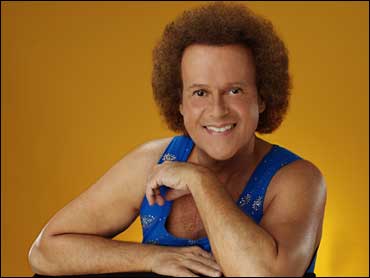 Fitness guru Richard Simmons will be returning to the "Late Show with David Letterman" Wednesday night on CBS, his first visit to the show in six years.

Simmons had been a frequent visitor to Letterman's late night programs over the years, making a total of 35 guest appearances.

During his visits, Letterman would often tease Simmons about his shorts or exuberant behavior, and Simmons would react with a playful pout and turn to the audience for sympathy.

In his last appearance on the show, on Nov. 22, 2000, Simmons came on stage wearing an orange and yellow turkey outfit.

Letterman promptly hosed him down with a fire extinguisher.

Simmons is currently on "a personal crusade to bring fitness back to the public school system." He has posted a survey on his Web site and invited parents, teachers, and school administrators to answer questions about the state of their school's physical education program.

"I plan to compile the information I receive and take it to Washington to share with the only people who can make the needed changes: the men and women in our government," Simmons writes on his site.