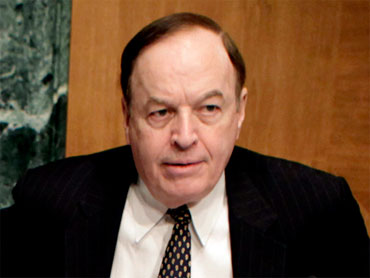 The White House is slamming Republican Sen. Richard Shelby of Alabama for blocking Senate action on at least 70 of President Obama's nominations because he wants money for two projects in his home state.

In a gaggle with reporters this morning, White House Press Secretary Robert Gibbs said "if you needed one example of what's wrong with this town, it might be that one senator can hold up 70 qualified individuals to make government work better because he didn't get his earmarks."

"It boggles the mind to hold up qualified nominees for positions that are needed to perform functions in a government because you didn't get two earmarks," he added.

A spokeswoman for Senate Majority Leader Harry Reid has confirmed to reporters that Shelby had put a "blanket hold" on most pending nominations. (A hold is essentially a promise to keep a piece of Senate business from being considered via the Senate's convoluted procedural rules.)

The reason? He wants to make sure his state gets money for a pair of lucrative defense contracts.

One is a $35 billion contract to allow Northrop Grumman and Airbus, not Boeing, build an Air Force refueling tanker(more on that here), and the other an FBI explosives testing center that has not been built despite Shelby earmarking $45 million for it in 2008.

A spokesman for Shelby called the projects "unaddressed national security concerns" in a statement to reporters.

"Among his concerns is that nearly 10 years after the U.S. Air Force announced plans to replace the aging tanker fleet, we still do not have a transparent and fair acquisition process to move forward," said spokesman Jonathan Graffeo, according to the New York Times. "The Department of Defense must recognize that the draft Request for Proposal needs to be significantly and substantively changed."

A so-called "blanket hold" is exceedingly rare and perhaps unprecedented.

Mr. Obama and Democrats have been calling on Republicans to work with them on behalf of the American people in the wake of Scott Brown's election to the Senate, and Shelby's maneuver supports the White House's suggestion that the minority party is obstructionist and overly concerned with politics.

"This is just the latest example of this kind opposition for opposition's sake that the President talked about earlier this week," White House Communications Director Dan Pfeiffer wrote in a blog post. "This strategy of obstruction is preventing qualified people from doing their jobs on behalf of the American people and it's preventing real work from getting done in Washington."

Shelby's move also cuts against the tide of fiscal conservatism that has risen on the right in the past two years and become associated with the Tea Party movement.