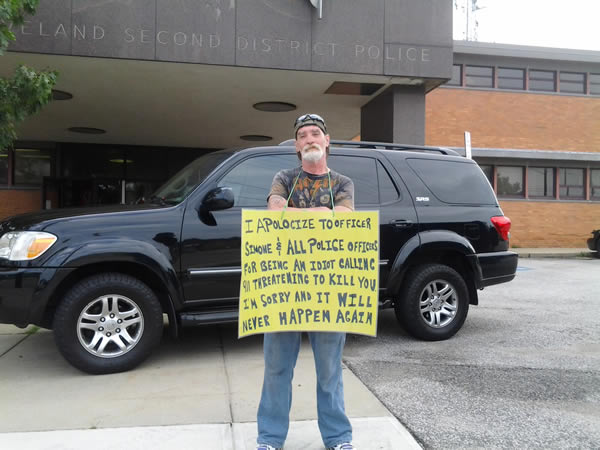 (CBS/AP) CLEVELAND - A Cleveland judge may soon run out of "idiot" signs.

Judge Pinkey Carr, who is known for making a woman wear an "idiot" sign in public in Nov. 2012 for driving around a school bus, sentenced 58-year-old Richard Dameron in March to hold a similar sign as punishment for threatening police officers in 911 calls. He began fulfilling his punishment Monday.

Dameron was sentenced in March to 90 days in jail and also to hold the sign in front of a district police station for three hours each day for a week when he got out.

CBS affiliate WOIO reports Dameron stood outside Cleveland's Second District Police Station Monday with a sign reading, "I apologize to Officer Simone & all police officers for being an idiot calling 911 threatening to kill you. I'm sorry and it will never happen again."

The station reports Dameron was initially supposed to fulfill his punishment in June, but he didn't show up. He claimed he was drunk and didn't have a ride. Dameron was then hauled back to court and a furious Judge Carr sentenced him to an additional 90 days in jail.

On Monday, Dameron told CBS affiliate WOIO he's looking forward to putting this behind him.

"I'm sorry for being a fool like I am. And I hope that Officer Simone and his family takes my apology because I was drunk. I apologize from deep down," he said. "I just want it to be over with and done."

In Nov. 2012, Judge Carr sentenced 32-year-old Shena Hardin to stand at an intersection wearing a sign essentially calling herself an "idiot" after she was caught on videotape driving on a sidewalk to avoid a school bus unloading children. Hardin was ordered to stand at the intersection for two days wearing a sign reading: "Only an idiot drives on the sidewalk to avoid a school bus."

Carr has said that sometimes she has to get creative to get through to people.