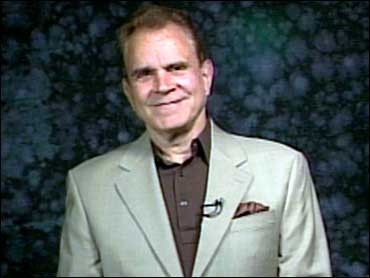 If imitation is the sincerest form of flattery, then comedian Rich Little, who for years did a remarkable impersonation of President Reagan, is a huge fan of the 40th president.

Little, who won belly laughs at Reagan's expense recalls that the former president didn't mind laughing at himself either.

"He was the best audience I've ever had in my life," Little tells The Early Show co-anchor Hannah Storm. "He screamed with laughter. And of course, when I saw him laughing, that took the pressure off and gave me more confidence. He was terrific. He had a great sense of humor. I think he got a lot of that sense of humor from working at Warner Brothers all those years with all those pranksters, Errol Flynn and Alan Hale and Frank McHugh and all those guys. All they did was clown around."

Though they were not social friends, they did meet each other at several charity and White House events. Little recalls, "He would tell me many stories about working on movies, and sometimes he'd get into the story and Nancy was anxious to get him away from me, because there were other guests that she wanted him to meet. And he'd say, 'Nancy, I'm telling Rich about that dirt story with Errol Flynn.' And she'd say, 'Oh, Ronny, not the dirt story. It's a 20-minute story. We've got dignitaries here from Europe and everything. They're waiting to meet you.' He said, 'I'll speed it up.' And he would tell me all these stories about pranks they had on movies, you know."

Not only did the president loved to tell stories but he enjoyed jokes as well. Little says he always had to have a joke ready when he met the president because Mr. Reagan always would tell him one off the bat and expect one from Little in return.

Asked what made the president such a fantastic person to imitate, Little says, "He had so many mannerisms, for one thing. I think he had about 12." One such distinctive piece of body language was looking down every time he spoke.

Little says, "One time I asked him. I said, 'Mr. President, why is it that you always look down before you speak?' And he said, 'Well, Rich, you'd look down, too, if you owned a horse ranch.'"

Interestingly, the president loved to imitate Little. "He loved to do an impression of me doing him, which he did many times. Sometimes after I'd perform there, he'd get up to thank me and he would start to do me."

Little's Reagan routine included singing the song "My Way" and giving a Reagan speech, "The Shinning City on The Hill." There are many funny memories Little has about the president, a couple particularly vivid in his mind.

Little says, "The first time I ever met him personally, I was invited to an afternoon function at the White House. I was late. I couldn't believe it. I was hung up in traffic. I ran down the corridor to the Lincoln Room, where this function was being held, and he was standing outside the door talking to the press.

"And this is at the time of Grenada. And I could see that he wanted to get in and mingle with the people and have something to eat. And when he saw me coming, he said, 'Rich, thank heaven you're here. You do me better than I do, so would you finish this interview for me? I'm going for a sandwich.' And he turned and walked away and left me with the press. Then he turned back and he said, 'All I ask is, you don't get us into a war.'

"And then I'm standing there and the press is asking me questions like I'm Reagan. And one of them says, 'Mr. President,' and I'm doing the whole bit. He says, 'What do you think of Grenada.' I said, 'I think it was the best song that Buddy Greco ever recorded.' I looked behind me and Reagan hadn't gone into the room. He was peeking out from behind the door listening to me and breaking up. Oh, my gosh, was he breaking up when I said that about Buddy Greco."

The other remembrance is about the time when Little got an early phone call from the president.

Little says, "I was up in Rochester, N.Y. He had an operation up there. I think it was the time they shaved his head. I can remember him with his head shaved. I forget why he went to Rochester. Anyway, he was up there, and I was doing a benefit up there, and I was staying at this hotel and it was 6 o'clock in the morning. And as we all know, Reagan always got up at 6 in the morning to chop wood and clear brush.

"And my phone rings. I'm just half asleep. Who is calling me at 6:30 in the morning? So I pick up the phone. And I hear, 'Um, Rich, this is Jimmy Stewart." And I said, 'Oh, who's this? You're doing Jimmy Stewart for me? Who are you?' He said, 'Well, I'm Jimmy Stewart.' I thought it was just some clown phoning me up doing impressions. And then he started to say, 'No, this is Ron. This is the president.' I went, 'Oh, that's terrible.' And hung up on him. I actually, I hung up and I thought, 'Oh, somebody got a hold of my number.'

"Anyway, I had to phone him back. Somebody, one of his aides phoned me and said Ron was a little bewildered so I phoned him back and I said, 'Mr. President, please forgive me. I thought it was some idiot phoning me doing bad impressions.' And he said to me, 'I guess I should have done my John Wayne.' I mean, he just had such a great sense of humor."

As for the president's death, Little says, "It was very sad, of course, for everybody, particularly me, because I got to know him pretty good. And, you know, we expected it was going to happen. It wasn't that big a surprise, but I'd never seen so many tributes to a man. He was so well loved. I don't think since John Kennedy's funeral have I seen anything like this."

Little is currently performing at the Sun Coast Casino in Las Vegas, Nev. He impersonates nine U.S. presidents including the late Ronald Reagan. Little's been on the road for the last six weeks and is scheduled to be on the road for the next 12 months.

In the past, Little has been on tour with a play called "The Presidents," which he wrote and starred in. In it, Little impersonates nine presidents in full make-up and costume.