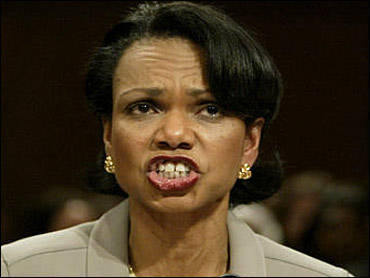 In Europe, it's hard for some to think of Condoleezza Rice — Colin Powell's expected replacement as U.S. secretary of state — without recalling the low points in trans-Atlantic relations that grew out of the war in Iraq.

After all, it was Rice who raised eyebrows last year with her Machiavellian suggestions for how Washington should treat European opponents of the U.S.-led invasion.

"Punish France, ignore Germany and forgive Russia," Rice was widely quoted as telling associates in the spring of 2003.

Trans-Atlantic ties have since improved to some extent. But Rice's reputation still precedes her.

But Barnier underlined French hopes of rebuilding ties with the United States no matter who holds the post of chief diplomat. "If she is named ... we will continue to have the same relations," Barnier told Europe-1 radio. "With the United States, the moment has come, looking ahead of us, to rebuild, to renew this trans-Atlantic relationship."

Many in Europe, Asia and the Middle East believed Rice will add a more conservative, hawkish bent to U.S. diplomacy after Powell, seen by many as a moderating voice in a Cabinet of hawks.

One immediate issue she will face is the Mideast peace process following the death of Yasser Arafat.

Palestinians said the new Bush administration must put more energy into the quest for peace.

Palestinian Cabinet minister Saeb Erekat said Palestinian officials had dealt with Rice on several occasions and found her to have an "analytical and systematic" mind.

"I believe she's committed to President Bush's vision of a two-state solution and I hope that the second Bush administration will exert every possible effort in order to realize this vision," Erekat said.

Israel warmly welcomed Rice's naming to the post, with Israeli Foreign Minister Silvan Shalom saying: "She is a true friend to Israel. Her friendship toward Israel is very deep and stems from religious feelings and deep faith."

France's left-leaning daily newspaper Liberation noted Rice's "extremely cut-and-dried opinions" on occasions and said she has surprised diplomats with the "very hard and firm tone with which she speaks of the Palestinians."

"With Yasser Arafat gone, and moderate and realistic leaders hopefully taking over, we hope that the American administration decides to solve that issue, especially that Rice has good relations with the Israeli leadership," former Kuwaiti Oil Minister Ali al-Baghli said.

But Dominique Moisi, a special adviser to the French Institute of International Relations, said Rice's "punish France" reputation is "secondary" to Washington and Paris' apparent desire to mend fences.

"The Americans need France in Iraq and overall in the Middle East, and the French feel that they went too far and isolated themselves," Moisi said

Analysts in Kuwait, a major ally of Washington in the Gulf since a U.S.-led coalition liberated it in 1991 from a seven-month Iraqi occupation, said a harder line may be a good thing.

"With her strong personality and the support of the American administration, she could be able to achieve change in foreign policy," Ahmed al-Baghdadi, political science teacher at the state Kuwait University, said of Rice. "She is tough and more decisive, and this is what the area needs."

Rice's new role could "increase the U.S. policy's determination and drive to finish what it started such as (pushing for) democratic reform, and building a new Iraq."

Mikhail Margelov, the head of the foreign affairs committee in Russia's upper house of parliament, said that while Rice's appointment could signal the toughening of Washington's foreign policy, radical changes in its Russia policy would be unlikely.

Latvian Foreign Minister Artis Pabriks said Rice's appointment would benefit his country — dubbed part of the "new Europe" by Bush last year — and its Baltic neighbors Lithuania and Estonia, which were occupied by the Soviet Union for more than 50 years.

"It would be a very intellectual choice, and (Rice) also understands Russia very well. This is important for Latvia and for Europe," he said. "We are Europeans but we value our strategic partnership with America as well."

World leaders, meanwhile, lavished praise on Powell, hailing his efforts to build international consensus. To many, particularly in Europe and China, Powell was seen as a multilateralist influence in a U.S. administration seen as too willing to act on its own.

"Mr. Powell showed his understanding of our country and made so many efforts to promote friendship," Japanese Prime Minister Junichiro Koizumi said on Tuesday. "I'd like to express my heartfelt respect for his efforts and achievements."

Chinese Foreign Minister Li Zhaoxing called Powell "a good friend" in comments to Hong Kong reporters on the sidelines of Chinese President Hu Jintao's visit to Brazil. He added that the change in personnel would not change relations with Washington.

"No matter what happens we will continue to care for and support the development of an amicable, cooperative relationship between China and the United States," Li said in comments aired in Hong Kong on Tuesday.