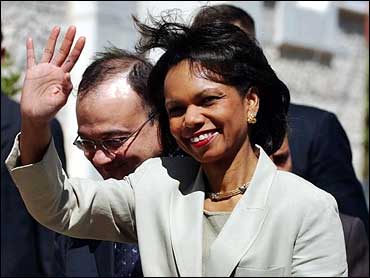 Secretary of State Condoleezza Rice, renewing U.S. involvement in the Mideast peace process on Saturday, said joint planning by Palestinian and Israeli leaders is crucial to the successful withdrawal of Jewish settlers from the Gaza Strip.

She was meeting Sunday with Israeli Prime Minister Ariel Sharon in Jerusalem, part of a weeklong trip to the Middle East and Europe.

Sharon's Gaza withdrawal plan has led to fears that Israeli settlers could put up a fight or that militants opposed to peace might use violence to disrupt their departure. Also, it is not clear that Palestinians can ensure security and sustain a working government to fill the vacuum Israel leaves behind after 38 years.

"There needs to be clarity about what to expect," Rice told reporters Friday, en route to the region. "That, I think, will lead to less confusion on what is likely to be, under the best of circumstances, a pretty complicated day."

Rice said she would remind Abbas that Palestinians "play a critical role in providing a secure environment in which the Gaza disengagement can take place."

She gave a cautious endorsement to Palestinian progress to organize and train an effective security force, but said "more could be done." In addition, Rice said the cease-fire Abbas has negotiated with Hamas must hold.

In southern Gaza on Saturday, Palestinian militants attacked a settlement, leading to a gun fight that killed one of the attackers and wounded a second, the army said. No soldiers or residents were injured.

Rice took notice that the Palestinian parliament passed a law Saturday removing a major hurdle to legislative elections that originally were scheduled for next month but were postponed indefinitely.

"I know that this is an important day," Rice said at the start of meeting with leaders of Palestinian civil society and opposition figures. They included Hanan Ashrawi, an independent Palestinian lawmaker, and Mustafa Barghouti, a physician and pro-democracy activist who was Abbas' main challenger in the presidential election in January.

Rice stressed the importance of political leadership "that is not in the executive branch."

Israel's planned August withdrawal from all 21 Jewish settlements on Gaza and four of the 120 in the West Bank is a major benchmark of progress toward an eventual peace deal.

"What they are doing is moving thousands of people with their effects, and families, and it's going to be complicated," Rice said before the talks with the Palestinian leaders.

The U.S. has been taking a mostly hands-off approach to the peace process.

Rice warned Israel not to complicate the path to peace through new Jewish settlements just as the Gaza pullout date nears.

"We don't intend that the Israelis try to create facts on the ground," Rice said during the flight from Washington. "They simply cannot engage in activities that are supposed to prejudge," the final terms of a peace settlement.

Palestinians charge that Israel has tried to force territorial concessions by building settlements and outposts on land that would presumably one day belong to a separate Palestinian homeland. The two sides are arguing now over whether Israel will build more than 3,000 new homes near Jerusalem.

The U.S. long has supported the idea of two democratic states for Israelis and Palestinians. But it has not always been clear about the details. Recently, however, the Bush administration has made the no-new-settlements issue very plain.

With Abbas at his side at a White House meeting last month, President Bush made clear his support for a Palestinian state within the rough outlines of the current West Bank and Gaza territories.

He warned Israel not to complicate matters through settlements or other actions that make it physically difficult to construct viable Palestinian borders.