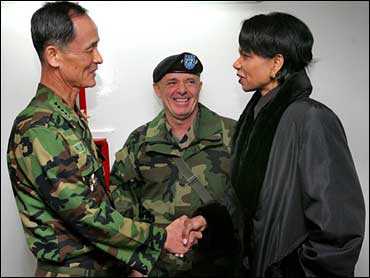 From inside a mountainside bunker, U.S. Secretary of State Condoleezza Rice saw firsthand Saturday what a war with North Korea might look like.

Rice became the most senior American official to tour a command center for U.S. and South Korean troops that would be the battle headquarters in the event of fighting with the communist North.

"I know that you face a close-in threat every day," Rice told troops at Command Post Tango, or Theater Air Naval Ground Operations.

Rice's visit coincided with a twice-yearly war exercise involving thousands of American and South Korean soldiers. When Rice got a look at the command center, it also was the first time that reporters and cameras were allowed into the bunker south of Seoul.

North Korea denounced the exercises as a rehearsal for a U.S.-led pre-emptive attack.

"The Republic of Korea, a great democracy now, faces a threat across the divide of a state that is not democratic, that is not free, and that does not have the best interests of its people at heart," Rice said.

Rice's trip to Asia is intended partly to push North Korea to resume nuclear disarmament talks. She repeatedly has assured North Korea that the United States has no intention of invading.

Still, more than 32,000 U.S. troops are stationed in Korea, with more at the ready nearby. They are testament to the tension and suspicion between North and South Korea five decades after active hostilities ended in the Korean War.

"In parts of the world, the Cold War has ended and we've been able to (produce) a continent like Europe, that is now whole and free," Rice told commanders and troops. "But of course, divisions remain here in Korea."

In a large underground room that resembled a university lecture hall, Rice received a classified briefing on war preparations. In place of a blackboard, the room has a huge computer-driven display screen.

When reporters were brought into the room, the lighted screen showed only the State Department seal where maps or detailed planning data would be.

For the military exercise, about 17,000 U.S.-based troops were joining 6,000 soldiers stationed in South Korea. North Korea contended the exercise was "a maneuver for a nuclear war against the North."

"The U.S. imperialists unleash a new war, they will pay a high price," the North's official Rodong Sinmun newspaper said in a commentary carried by its official news agency, KCNA.

North Korea's nuclear capability was expected to be a major topic of Rice's talks with South Korean leaders on Sunday and Chinese officials on Monday.

Rice appealed to China, North Korea's closest ally, to use its leverage to bring the North back to disarmament talks.

The United States, Russia, Japan, South Korea and China began a joint diplomatic effort with North Korea last year aimed at persuading the country to give up its nuclear program.

But those six-nation talks, hosted by China, stalled in September, when the North Koreans pulled out and refused to return to the discussions. North Korea announced last month it has built a nuclear weapon.

Rice said Saturday in Tokyo, her last stop before Seoul, "We are committed to diplomacy, but I think it goes without saying that no one is going to be prepared to allow the North Koreans to just go down a road that threatens everyone."

The North Koreans have not responded to a U.S.-backed peacemaking proposal and have demanded an apology after Rice this year branded the country an "outpost of tyranny."

North Korea has said it wants nuclear weapons as a defense against a potential attack from U.S. and South Korean forces.