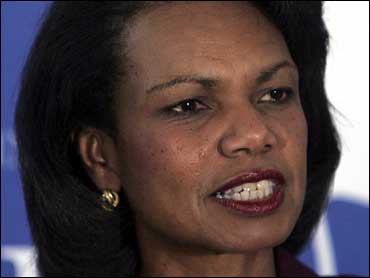 Secretary of State Condoleezza Rice on Friday called on North Korea to honor its pledge to disable all its nuclear weapons facilities and provide a complete declaration of its atomic program by the end of the year, although she left room for Pyongyang to miss the deadline.

"I sincerely hope it will be by the end of the year, but the key is to get this process right," Rice said of the nuclear declaration, speaking during a news conference at the State Department.

Rice said North Korea's compliance with an international agreement to shut down it nuclear plants is key to improved diplomatic relations with the United States and its allies.

Rice would not comment on a report about the discovery by U.S. scientists of uranium traces on aluminum tubes in North Korea, apparently contradicting Pyongyang's claim that its acquisition of the tubes was for conventional purposes rather than a nuclear program. Such tubes could be used in the process of converting hot uranium gas into fuel for nuclear weapons.

"We have been very clear that we expect a declaration from North Korea that is complete and accurate," Rice said. "We have long been concerned about highly enriched uranium as an alternative (nuclear weapons) route in North Korea."

The North had promised to disable its main nuclear facilities at Yongbyon, north of Pyongyang, by the end of the year and also make a complete declaration of its atomic programs for eventual dismantlement.

In exchange, the impoverished country is receiving energy aid and the U.S. has said it would remove the North from terrorism and sanctions blacklists.

However, diplomats have said the North would likely not be safely able to complete one key disablement step - removing the fuel rods from its reactor - for several months.