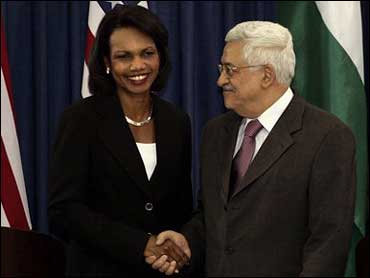 Secretary of State Condoleezza Rice said Thursday an upcoming U.S.-sponsored Mideast conference must be "substantive," and that both sides must draft a document beforehand that lays "foundations for serious negotiations."

The conference "has to be substantive and advance the cause of a Palestinian state," Rice told a joint news conference with Palestinian President Mahmoud Abbas. Participants must not "simply meet for the sake of meeting," she said.

Rice is trying to hammer out a joint document on Palestinian statehood in separate talks with Israeli and Palestinian leaders, reports CBS News correspondent Robert Berger.

"We want to be as supportive as possible of this bilateral dialogue, so that two states can live side by side in peace and freedom," Rice said.

The Palestinians want the conference, tentatively set for November, to yield an outline for a peace deal, complete with timetable, while Israel wants a vaguer declaration of intent. Key Arab states, such as Saudi Arabia, have said they would only attend if concrete results are achieved.

Abbas told the news conference that he believes some Arab countries are hesitant to confirm their attendance because the objectives are not clear.

Abbas said he expects the conference to launch serious negotiations with Israel.

"We believe the time is right for the establishment of an independent Palestinian state, with east Jerusalem as its capital, and for living side by side in peace and security with the state of Israel," Abbas said.

Rice met separately Thursday with Abbas and his prime minister, Salam Fayyad, in the West Bank city of Ramallah, and is scheduled to speak with Israeli Prime Minister Ehud Olmert again after her meeting with Abbas.

The Palestinians want a specific framework for a peace deal, complete with a timetable, while Israel says it wants a vaguer declaration of intentions.

Rice said the document must "lay foundations for serious negotiations."