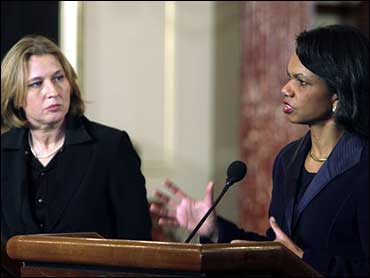 Secretary of State Condoleezza Rice is accusing Iran and Syria of being behind the protests triggered by drawings of the Prophet Muhammad.

During a news conference at the State Department with Israel's foreign minister, Rice said she has "no doubt" that Tehran and Damascus have "gone out of their way to inflame sentiments." "The world ought to call them on it," Rice said.

"Nothing justifies the violence that has broken out." Rice said this is a time when everyone should urge calm "and should urge that there is an atmosphere of respect and understanding."

"We reject violence as a way to express discontent with what may be printed in a free press," Mr. Bush said.

"I call upon the governments around the world to stop the violence, to be respectful, to protect property, protect the lives of innocent diplomats who are serving their countries overseas," the president said.

Mr. Bush also said that Americans believe in a free press, and added, "With freedom comes the responsibility to be thoughtful about others." He made his comments after a meeting with King Abdullah II of Jordan.

"With all respect to press freedoms, obviously anything that vilifies the Prophet Muhammad ... or attacks Muslim sensibilities, I believe, needs to be condemned," the king said.

He went on to say that those who want to protest "should do it thoughtfully, articulately, express their views peacefully."

Hundreds rioted outside the U.S. military base in the southern city of Qalat on Wednesday, throwing rocks at Afghan police. Police tried to clear the crowd by firing shots in the air, then were forced to fire into the crowd, said Ghulam Nabi Malakhail, the provincial police chief.

The Afghan protests have involved armed men and have been directed at foreign and Afghan government targets, fueling the suspicions there's more behind the unrest than religious sensitivities.

"You have a combination of legitimate and deeply foul religious objection with political opportunism and part of this growing problem between the western world and Islamic world," Michael O'Hanlon, a senior fellow at the Brookings Institution, said on CBS News' The Early Show.

But Yonts stressed they had no evidence to support suggestions that al Qaeda or Taliban are linked to the riots in Afghanistan.

Four people were killed and at least 20 were wounded, officials said.