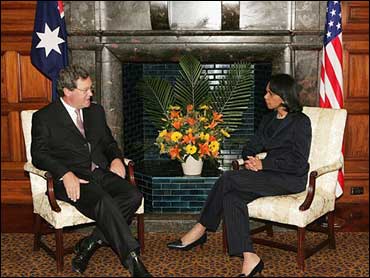 U.S. Secretary of State Condoleezza Rice on Thursday urged Iran to resume negotiations over its nuclear program, while also calling the country a central banker for terrorism.

Rice was speaking after meeting her Australian counterpart Alexander Downer for talks that covered topics including Iraq, Iran's nuclear ambitions, Indonesia's development and the recent nuclear deal between Washington and India.

Later Thursday, riot police clashed with dozens of Iraq war protesters outside a Sydney music school where Rice was due to give a speech. Police on horseback pushed back a crowd of around 60 protesters in the city center, and led away at least two protesters.

Rice called Iran the "central banker of terrorism," though she didn't elaborate on that, and said it was time for the country to "heed the international community's call" to resume negotiations on its nuclear program.

Rice said she was "quite certain the (U.N.) Security Council will find an appropriate vehicle for expressing again ... the desire of the international community ... that Iran return to negotiations."

Earlier this week, China and Russia objected to a tough U.N. Security Council statement backed by the United States, Britain and France calling for a report in two weeks on Iran's compliance with demands that it suspend uranium enrichment.

The five veto-wielding council members are united against Iran developing nuclear weapons, but they disagree on how to get Tehran to comply with demands by the U.N. nuclear watchdog to stop all enrichment and reprocessing and answer questions about its controversial nuclear program.

"If you negotiate you have to put something on the table," commented Dr. Hans Blix, former UN Chief Weapons Inspector in an Exclusive CBS News Interview. "I think that's what's missing. We hear demands upon the Iranians, but we hear very little about what's being offered to them."

Uranium enrichment can be used either in the generation of electricity or to make nuclear weapons. Iran insists its program is to produce nuclear energy but the International Atomic Energy Agency has raised concerns that Tehran might be seeking nuclear arms.

At the same wide-ranging joint press conference with Downer, Rice also said she expects Iraq to have a secure and stable government within a couple of years, and called on China to be transparent about its military buildup.

"I think there is a very good chance that the Iraqi people, with the support of their coalition partners, will have built the foundation for a stable and secure Iraq over the next couple of years," she said, just days away from the third anniversary of the U.S.-led invasion of Iraq.

"The difficulty for the Iraqis is that they do it in the face of violence of those who do not want the political process to go forward," she added.

Anti-war activists in Sydney branded Rice a "war criminal" for her role in the Iraq invasion and said they would demonstrate later Thursday outside a music school where Rice was due to give a speech.

"By helping coordinate the illegal invasion and occupation of Iraq, Condoleezza Rice is officially responsible for the deaths of between 25,000 and 150,000 people in Iraq and growing civil unrest in that country," said Anna Samson, spokeswoman for a group called the Stop the War Coalition. "War criminals are not welcome in Australia."

Later in her three-day visit to Australia, Rice was due to hold talks with Downer and Japanese Foreign Minister Taro Aso that are expected to focus on China's fast-growing economic and military might.

"We believe that the growth of the Chinese economy, if it is done in a rules-based way, ... is a very positive development," she said.

But she added: "We have said we have concerns about the Chinese military build up."

"We have told the Chinese that they have to be transparent about what the military build up means," she said.