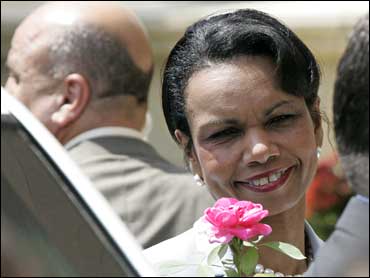 Secretary of State Condoleezza Rice made a surprise visit to volatile Lebanon under heavy guard Friday to encourage a new democratic government outside Syrian control.

Rice met with Saad Hariri, son of assassinated former Prime Minister Rafik Hariri. Together, they visited the seaside grave of the elder Hariri, an anti-Syrian politician slain in a February car bombing. Afterwards, she went directly to the Presidential Palace for a meeting with Lebanon's pro-Syrian President Emile Lahoud.

"This will be an opportunity first of all to congratulate the Lebanon people on their incredible desire for democracy," Rice said en route to Beirut.

"The armored vehicles that she and her party were riding in move with police escorts at fast speeds, and they keep changing lanes without signaling. They are constantly maneuvering at high speeds and quick movements, and if a civilian car gets too close, the bodyguard in front leans out the wind and points an automatic weapon at the car's driver," said Wolfson.

"They keep pressing forward and they have now formed a government," Rice said. "I look forward to meeting and see how the international community and the United States in particular can be supportive."

CBS News State Department Reporter Charles Wolfson said that members of the press corps traveling with Rice were given some advanced notice of the visit but were asked not to reveal any travel details. She is the first senior U.S. official to visit Beirut in more than two years.

Rice arrived from Jerusalem, home base for a long weekend of talks with Israeli and Palestinian leaders that included a meeting with Israeli Prime Minister Ariel Sharon at his desert ranch Friday morning. There, Sharon and Rice talked about both the preparations for the Gaza withdrawal as well as the situation after it.

The Lebanese opposition blamed Syria and its agents for Hariri's slaying. And a new government emerged from a season of political change following the assassination.

Hariri's son leads the newly dominate anti-Syrian faction in parliament and a protege of his father will be the new prime minister.

On Wednesday, the State Department said it was prepared to work with the new government but not with any Hezbollah Cabinet members. The new 24-member parliament includes one member of the militant group the U.S. calls a terrorist organization.

Rice's predecessor, Colin Powell, was the last senior American diplomat to come to Beirut. At the time of his May 2003 visit, Syria was still firmly entrenched as the dominate political and military force in Lebanon.

The United States helped lead international demands that Syria end its three decades of dominance in Lebanon. Syria withdrew its 14,000 troops in April, after weeks of street protests and political turmoil set off by the Hariri killing.

Rice went to Jerusalem in a hastily arranged visit in an effort to rescue a shaky Mideast truce amid an escalation of violence before Israel's mid-August withdrawal from the Gaza Strip. Her schedule was left loose deliberately so Rice could shuttle between the leaders with last-minute concerns.

Although Rice repeatedly has said the United States would take a back seat as the Israelis and Palestinians work out their differences, her trip was seen as a sign that she planned to keep up the pressure for progress.

The hastily planned trip was Rice's third to Jerusalem and the West Bank since she took over at the State Department in January.