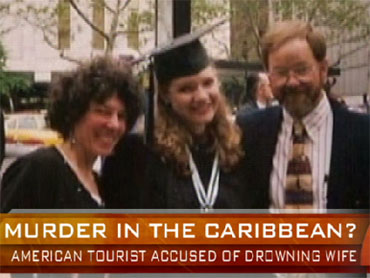 A former Rhode Island dive shop owner convicted of killing his wife on a Caribbean scuba outing in 1999 was sentenced Tuesday to 25 years in prison for what prosecutors called a near-perfect crime motivated by his desire to pursue another woman.

David Swain nearly a decade after Shelley Tyre drowned while diving at a sunken ship off Tortola. Authorities in the British territory initially classified her death as an accident, but filed charges after the woman's family won a civil judgment against Swain in the U.S. in 2006.

Swain, 53, faced a mandatory life sentence following his Oct. 27 conviction. Justice Indra Hariprashad-Charles said the premeditated nature of the crime bound her to deny a defense request that he become eligible for parole after 18 years in prison.

"It is my view that this murder was carefully planned and premeditated and calls for stiff punishment," the judge said Tuesday.

In the trial, prosecutors argued that Swain killed Tyre to pursue a romance with another woman and get his 46-year-old wife's inheritance. Swain's lawyers called it a weak case that lacked physical evidence and plan to appeal the verdict.

Jen Swain Bloom, a daughter from his first marriage, said evidence that would have helped her father was improperly barred from the trial.

"My family, and my father's friends and colleagues are still 100 percent in support of my father, and his innocence," Bloom wrote in a letter to local journalists. "No one that has spent any time with or actually knows my father thinks he should spend one more second behind bars."

Before the hearing, Bloom spoke with CBS News affiliate WPRI-TV in Providence.

"We want him out," she told WPRI. "He's there for really no good reason at all."

She submitted 45 letters to the court supporting parole for Swain, also a former member of the town council in Jamestown, R.I.

In one letter, Jeremy Swain, a son also from the first marriage, said his father has been teaching fellow inmates math and reading in the two years he has spent so far in prison on Tortola. "David Swain is a man who will do good works no matter where he finds himself," he said.

No eyewitnesses or DNA evidence linked Swain to the murder. The prosecution's case rested largely on experts who testified they believed Swain wrestled his wife from behind at a depth of 80 feet (24 meters), tore off her scuba mask and shut off her air supply while they swam near the shipwreck. Her mask was damaged, the mouthpiece of her snorkel was missing, and her fin was found embedded in a sandbar - all signs of a struggle, prosecution witnesses said.

Tyre's parents doubted their daughter, an experienced diver, had accidentally drowned, and long suspected her husband had killed her. They were awarded $3.5 million in the civil jury trial, but Swain filed for bankruptcy and has not paid the sum.