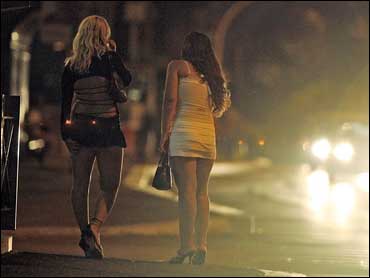 Prostitution is illegal in nearly every U.S. state besides parts of Nevada. But in Rhode Island, a legal loophole allows sex for cash - if it's done in private.

Now there is a push to close the loophole created by a legislative mistake 30 years ago.

Gov. Donald Carcieri is joining lawmakers, police chiefs and others Thursday at a news conference to press the state Senate to pass legislation that would make any prostitution illegal - effectively putting out of business the so-called massage parlors and spas that proliferate in the state. The bill passed the House of Representatives last month.

Rhode Island's loophole went mostly unnoticed until Providence police raided several spas in 2003 and then lost their cases in court because of the loophole. Police can arrest prostitutes operating on street corners, but they struggle to make charges stick against those operating indoors because the current law - passed when street prostitution was rampant - specifies outdoor solicitation.

Since then, lawmakers repeatedly have tried and failed to change the law, facing opposition from civil libertarians, advocates for sex workers and even the state chapter of the National Organization for Women. They say permitting the arrest of prostitutes could end up punishing human trafficking victims.

They doubt these trafficking women will open up to police after a raid, and they say a criminal record could make it more difficult for prostitutes to leave the sex industry.

"We would never arrest a domestic violence victim in the hope we could get her to cooperate against her abuser," said Andrea Ritchie, director of the Sex Workers Project at the Urban Justice Center in New York, who has lobbied against the bill.

Rep. Joanne Giannini, who sponsored the legislation to close the loophole, argues many of the women who work in the Rhode Island sex shops are coerced victims of human trafficking. Without a stronger prostitution law, police lack the tools to intervene.

"We're going to become a safe haven for the sex industry," she said. "I don't think that Rhode Island should have this dubious distinction."

Giannini's bill would give police discretion in making arrests and includes specific protections that allow human trafficking victims to be acquitted by arguing they were threatened, restrained or had their immigration papers stolen.

Rhode Island's current prostitution laws are the consequence of a 30-year-old legislative accident.

In 1976, a group called Call Off Your Old, Tired Ethics - or COYOTE - filed a lawsuit arguing the state cannot ban purely private sexual activity between adults, even if money is involved. The group also claimed that police were unfairly targeting women prostitutes while largely ignoring their male customers.

The disputed statute was so restrictive that a federal judge found it could potentially ban even some forms of consensual sex between adults.

Around the same time, residents in the West End of Providence complained to police that outdoor prostitution was so rampant that customers were randomly soliciting women on the street. So legislation was passed that outlawed only paid sex and cracked down on those making solicitations outside.

A federal judge who later analyzed the statute ruled it also had the effect of decriminalizing indoor prostitution.

Former House Speaker Matthew J. Smith said lawmakers never meant to draw a distinction between indoor and outdoor prostitution. Even so, he wants state lawmakers to eliminate any ambiguity.

"There's no choice," Smith said. "We're the laughing stock of the country."