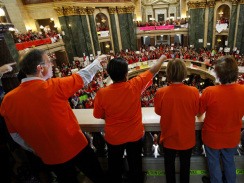 The protests against Wisconsin Republican Gov. Scott Walker's efforts to roll back most union collective bargaining rights have been, thankfully, free of violence - so much so that some protesters have been spotted in knitting circles. But the same cannot be said of the rhetoric around the protests, which has included calls for firing on the protesters and for the protesters themselves to "get a little bloody" for their cause.

The call for firing on protesters came from now-former Indiana Deputy Attorney General Jeff Cox, who responded to a Tweet from a Mother Jones reporter saying riot police have been ordered to clear protesters by retweeting the news with the words "Use live ammunition." He also wrote, "You're damn right I advocate deadly force" and, one week ago, "Planned Parenthood could help themselves if the only abortions they performed were retroactive."

Cox lost his job over the Tweets; the Indiana Attorney General's office released a statement reading in part, "We respect individuals' First Amendment right to express their personal views on private online forums, but as public servants we are held by the public to a higher standard, and we should strive for civility."

In Massachusetts, meanwhile, U.S. Rep. Michael Capuano, a Democrat, is apologizing for his comments at a Tuesday rally in support of the protesters where he said, "Every once and awhile you need to get out on the streets and get a little bloody when necessary."

In a statement, the Boston Herald reports, Capuano said that while he "strongly believe[s] in standing up for worker rights," his "passion for preserving those rights may have gotten the best of me yesterday in an unscripted speech." He added: "I wish I had used different language to express my passion and I regret my choice of words."

The conservative blogosphere, meanwhile, has seized on video of a protester outside the Tea Party-linked lobbying group FreedomWorks pushing away a camera after being confronted. (The video, labeled "Union Thug," was posted by FreedomWorks and caught fire among conservative bloggers; Michelle Malkin and others are calling for the man to be prosecuted for assault.)

Tabitha Hale, the conservative activist who shot the video, wrote on the conservative blog RedState that she was "shaken up by the level of sheer hatred I experienced today," adding that "The look of fury on his face in the close up is appalling." She repeatedly uses the word "thug" and writes that liberals are "violent racists."

She then writes that "the Left" was trying to defend the behavior with "the 'her skirt was too short' defense" and compares her experience to attacks on reporters in Cairo.

The House has voted to hold Bannon in contempt. Here's what happens next.
Brian Montopoli