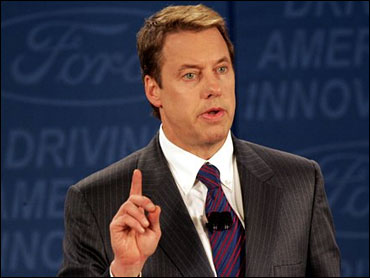 Shane Reynolds wondered whether his string of strong outings was in jeopardy Sunday when he took a look at the Kansas City lineup.

"They had a lot of guys in there who hit me pretty hard when they were in the National League," Reynolds said. "(Hal) Morris, (Jose) Offerman, (Terry) Pendleton and (Jeff) Conine, they had a pretty good strategy. I knew it was going to be tough."

Reynolds, however, was up to the task. The right-hander pitched an eight-hitter and Jeff Bagwell had three extra-base hits, leading the Astros to a 7-1 victory over Royals.

Reynolds (7-3) won his fourth consecutive start by pitching his third complete game. The Astros' third seven-game winner struck out nine and did not walk a batter.

Reynolds has pitched at least eight innings in each of his last four starts. He retired 10 in a row in one stretch and 19 of 22 between the first and eighth innings. In his last seven starts Reynolds has a 1.77 ERA. He has walked only nine batters in his last 55 2-3 innings.

"He really didn't have his good splitter until about the sixth inning," Houston manager Larry Dierker said. "But he hung in there until he found his rhythm. In the past when he didn't have his splitter he's had trouble, now he knows how to get guys out even when he doesn't have all his pitches."

Reynolds said a tip from pitching coach Vern Ruhle helped him find the groove Sunday after he'd given up back-to-back extra base hits to Johnny Damon and Offerman in the third.

"Vern told me I was overthrowing and to not try to throw as hard and let the pitch's action work," Reynolds said. "He was right."

Reynolds retired 10 in a row after Offerman's third-inning triple.

"Shane's been unbelievable," Bagwell said. "He could easily have 10 wins by now. He did today what he's done all year, hold the other team down and give us a chance to win."

Bagwell doubled twice and homered off Jim Pittsley (0-1), and Derek Bell added a double and a homer as the Astros built a 7-1 lead by the end of the fourth inning.

"When you get back-to-back complete games that shows you have good starting pitching," Kansas City manager Tony Muser said one day after Jose Lima shutout the Royals 6-0. "We couldn't get anything going against Reynolds and Pittsley struggled. He was trying to pace himself and he didn't pitch well."

Bagwell and Bell hit back-to-back doubles in the third and back-to-back homers in the fourth. Bagwell, who has struggled offensively this season, raised his average to .263.

"It's encouraging, but it's only one game so I'm not going to get too excited about it," Bagwell said.

The Astros took a 2-0 lead in the second when Carl Everett drew a one-out walk and stole second before Toy Eusebio tripled. Eusebio scored on Tim Bogar's squeeze bunt.

Bell and Bagwell doubled to left on consecutive pitches to start the third as the Astros made it 3-1. Following a walk to Moises Alou, Bagwell took third on Bill Spiers' fly to center and scored on another squeeze by Carl Everett.

Bell hit his eighth homer, a two-run shot, in the fourth off Pittsley. Brian Bevil came in and Bagwell greeted the right-hander with his ninth homer, giving the Astros a 7-1 lead.

Notes: The Astros signed major league saves leader Lee Smith to a minor league contract Sunday. ... Kansas City's Hal Morris hit .434 in April but is batting only .215 (14-for-65) since. ... Bagwell is hitting .205 (9-for-44) with runners in scoring position. ... The back-to-back homers by Bell and Bagwell marked the second time this season the Astros have hit consecutive homers. ... Kansas City third baseman Terry Pendleton left the game in the fifth inning because of a strained left rib cage. He is day-to-day.