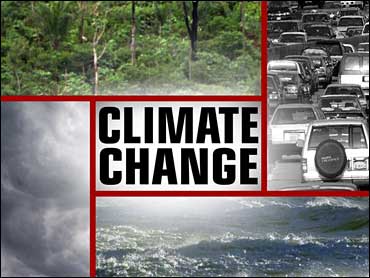 As a government scientist, James Hansen is taking a risk. He says there are things the White House doesn't want you to hear but he's going to say them anyway.

Hansen is arguably the world's leading researcher on global warming. He's the head of NASA's top institute studying the climate. But as correspondent Scott Pelley first reported last spring, this imminent scientist says that the Bush administration is restricting who he can talk to and editing what he can say. Politicians, he says, are rewriting the science.

But he didn't hold back speaking to Pelley, telling 60 Minutes what he knows.

Asked if he believes the administration is censoring what he can say to the public, Hansen says: "Or they're censoring whether or not I can say it. I mean, I say what I believe if I'm allowed to say it."

What James Hansen believes is that global warming is accelerating. He points to the melting arctic and to Antarctica, where new data show massive losses of ice to the sea.

Is it fair to say at this point that humans control the climate? Is that possible?

"There's no doubt about that, says Hansen. "The natural changes, the speed of the natural changes is now dwarfed by the changes that humans are making to the atmosphere and to the surface."

Those human changes, he says, are driven by burning fossil fuels that pump out greenhouse gases like CO2, carbon dioxide. Hansen has a theory that man has just 10 years to reduce greenhouse gases before global warming reaches what he calls a tipping point and becomes unstoppable. He says the White House is blocking that message.

"In my more than three decades in the government I've never witnessed such restrictions on the ability of scientists to communicate with the public," says Hansen.

Restrictions like an e-mail Hansen's institute received from NASA in 2004. "… there is a new review process … ," the e-mail read. "The White House (is) now reviewing all climate related press releases," it continued.

Why the scrutiny of Hansen's work? Well, his Goddard Institute for Space Studies is the source of respected but sobering research on warming. It recently announced 2005 was the warmest year on record. Hansen started at NASA more than 30 years ago, spending nearly all that time studying the earth. How important is his work? 60 Minutes asked someone at the top, Ralph Cicerone, president of the nation's leading institute of science, the National Academy of Sciences.

"I can't think of anybody who I would say is better than Hansen. You might argue that there's two or three others as good, but nobody better," says Cicerone.

And Cicerone, who's an atmospheric chemist, said the same thing every leading scientist told 60 Minutes.

Asked what is causing the changes, Cicernone says it's greenhouse gases: "Carbon dioxide and methane, and chlorofluorocarbons and a couple of others, which are all - the increases in their concentrations in the air are due to human activities. It's that simple."

But if it is that simple, why do some climate science reports look like they have been heavily edited at the White House? With science labeled "not sufficiently reliable." It's a tone of scientific uncertainty the president set in his first months in office after he pulled out of a global treaty to reduce greenhouse gas emissions.

"We do not know how much our climate could, or will change in the future," President Bush said in 2001, speaking in the Rose Garden of the White House. "We do not know how fast change will occur, or even how some of our actions could impact it."

Annoyed by the ambiguity, Hansen went public a year and a half ago, saying this about the Bush administration in a talk at the University of Iowa: "I find a willingness to listen only to those portions of scientific results that fit predetermined inflexible positions. This, I believe, is a recipe for environmental disaster."

Since then, NASA has been keeping an eye on Hansen. NASA let Pelley sit down with him but only with a NASA representative taping the interview. Other interviews have been denied.

"I object to the fact that I'm not able to freely communicate via the media," says Hansen. "National Public Radio wanted to interview me and they were told they would need to interview someone at NASA headquarters and the comment was made that they didn't want Jim Hansen going on the most liberal media in America. So I don't think that kind of decision should be made on that kind of basis. I think we should be able to communicate the science."

Politically, Hansen calls himself an independent and he's had trouble with both parties. He says, from time to time, the Clinton administration wanted to hear warming was worse that it was. But Hansen refused to spin the science that way.

Dozens of federal agencies report science but much of it is edited at the White House before it is sent to Congress and the public. It appears climate science is edited with a heavy hand. Drafts of climate reports were co-written by Rick Piltz for the federal Climate Change Science Program. But Piltz says his work was edited by the White House to make global warming seem less threatening.

"The strategy of people with a political agenda to avoid this issue is to say there is so much to study way upstream here that we can't even being to discuss impacts and response strategies," says Piltz. "There's too much uncertainty. It's not the climate scientists that are saying that, its lawyers and politicians."

Piltz worked under the Clinton and Bush administrations. Each year, he helped write a report to Congress called "Our Changing Planet."

Piltz says he is responsible for editing the report and sending a review draft to the White House.

Asked what happens, Piltz says: "It comes back with a large number of edits, handwritten on the hard copy by the chief-of-staff of the Council on Environmental Quality."

Asked who the chief of staff is, Piltz says, "Phil Cooney."

Piltz says Cooney is not a scientist. "He's a lawyer. He was a lobbyist for the American Petroleum Institute, before going into the White House," he says.

Cooney, the former oil industry lobbyist, became chief-of-staff at the White House Council on Environmental Quality. Piltz says Cooney edited climate reports in his own hand. In one report, a line that said earth is undergoing rapid change becomes "may be undergoing change." "Uncertainty" becomes "significant remaining uncertainty." One line that says energy production contributes to warming was just crossed out.

"He was obviously passing it through a political screen," says Piltz. "He would put in the word potential or may or weaken or delete text that had to do with the likely consequence of climate change, pump up uncertainty language throughout."

In a report, Piltz says Cooney added this line "… the uncertainties remain so great as to preclude meaningfully informed decision making. …" References to human health are marked out. 60 Minutes obtained the drafts from the Government Accountability Project. This edit made it into the final report: the phrase "earth may be" undergoing change made it into the report to Congress. Piltz says there wasn't room at the White House for those who disagreed, so he resigned.

"Even to raise issues internally is immediately career limiting," says Piltz. "That's why you will find not too many people in the federal agencies who will speak freely about all the things they know, unless they're retired or unless they're ready to resign."

Jim Hansen isn't retiring or resigning because he believes earth is nearing a point of no return. He urged 60 Minutes to look north to the arctic, where temperatures are rising twice as fast as the rest of the world. When 60 Minutes visited Greenland this past August, we saw for ourselves the accelerating melt of the largest ice sheet in the north.

"Here in Greenland about 15 years ago the ice sheet extended to right about where I'm standing now, but today, its back there, between those two hills in the shaded area. Glaciologists call this a melt stream but, these days, its a more like a melt river," Pelley said, standing at the edge of Greenland's ice sheet.

The Bush administration doesn't deny global warming or that man plays a role. The administration is spending billions of dollars on climate research. Hansen gives the White House credit for research but says what's urgent now is action.

"We have to, in the next 10 years, get off this exponential curve and begin to decrease the rate of growth of CO2 emissions," Hansen explains. "And then flatten it out. And before we get to the middle of the century, we've got to be on a declining curve.

"If that doesn't happen in 10 years, then I don't think we can keep global warming under one degree Celsius and that means we're going to, that there's a great danger of passing some of these tipping points. If the ice sheets begin to disintegrate, what can you do about it? You can't tie a rope around the ice sheet. You can't build a wall around the ice sheets. It will be a situation that is out of our control."

But that's not a situation you'll find in one federal report submitted for review. Government scientists wanted to tell you about the ice sheets, but before a draft of the report left the White House, the paragraph on glacial melt and flooding was crossed out and this was added: "straying from research strategy into speculative findings and musings here."

Hansen says his words were edited once during a presentation when a top official scolded him for using the word danger.

"You just used that word again that you're not supposed to use - danger," Pelley remarks.

60 Minutes wanted to speak with the president's science advisor, John Marberger, but after making requests to his office over several months, his director of communications Don Tighe told 60 Minutes Marberger would never be available.

Two weeks after our story first aired, NASA adopted a new communications policy. NASA says scientists can speak out as long as they label their opinions as their own.
Produced By Catherine Herrick/Bill Owens

Recognizing and treating obesity as a disease
Thanks for reading CBS NEWS.
Create your free account or log in
for more features.
View CBS News In
CBS News App Open
Chrome Safari Continue
Be the first to know
Get browser notifications for breaking news, live events, and exclusive reporting.