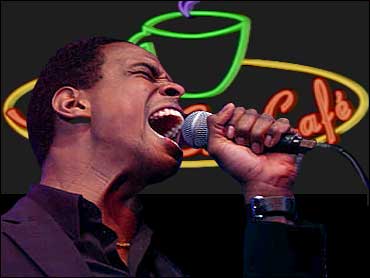 Singer Ricky Fante is being hailed as the new voice of soul.

Fante is proving himself with a talent for gritty and heartfelt vocals. He just finished recording 12 new tracks for his debut album, "Rewind," which is scheduled for a July 13 release.

He visited The Saturday Early Show''s studio to preview the CD with a performance on The Second Cup Café.

The 26-year-old Washington, D.C., native says being around a family that loved jazz and soul influenced his taste in music. From a young age, Fante says, he studied greats such as Issac Hayes, Al Green, Stevie Wonder, Elvis Presley and Marvin Gaye.

The church was also a great influence on his music. Like many soul singers before him, a young Fante joined his local choir, and the congregation was his audience. The singer also joined a music group in high school. After school, Fante enlisted in the Marines, serving for four years before making a move to California to pursue his musical ambitions and attend college.

Fante says "Rewind" is a tribute to the '60s melodies that can be found on old Motown and Stax records. The singer wrote and recorded the album with the help of Grammy-winning songwriter Jesse Harris, who wrote or co-wrote the songs on Norah Jones's Grammy-winning 2002 album, "Come Away With Me."

Soul music fans will be quick to recognize the horn-driven sound of "Rewind." Fante says he hopes the album will introduce the music he loves to new audiences, as well.