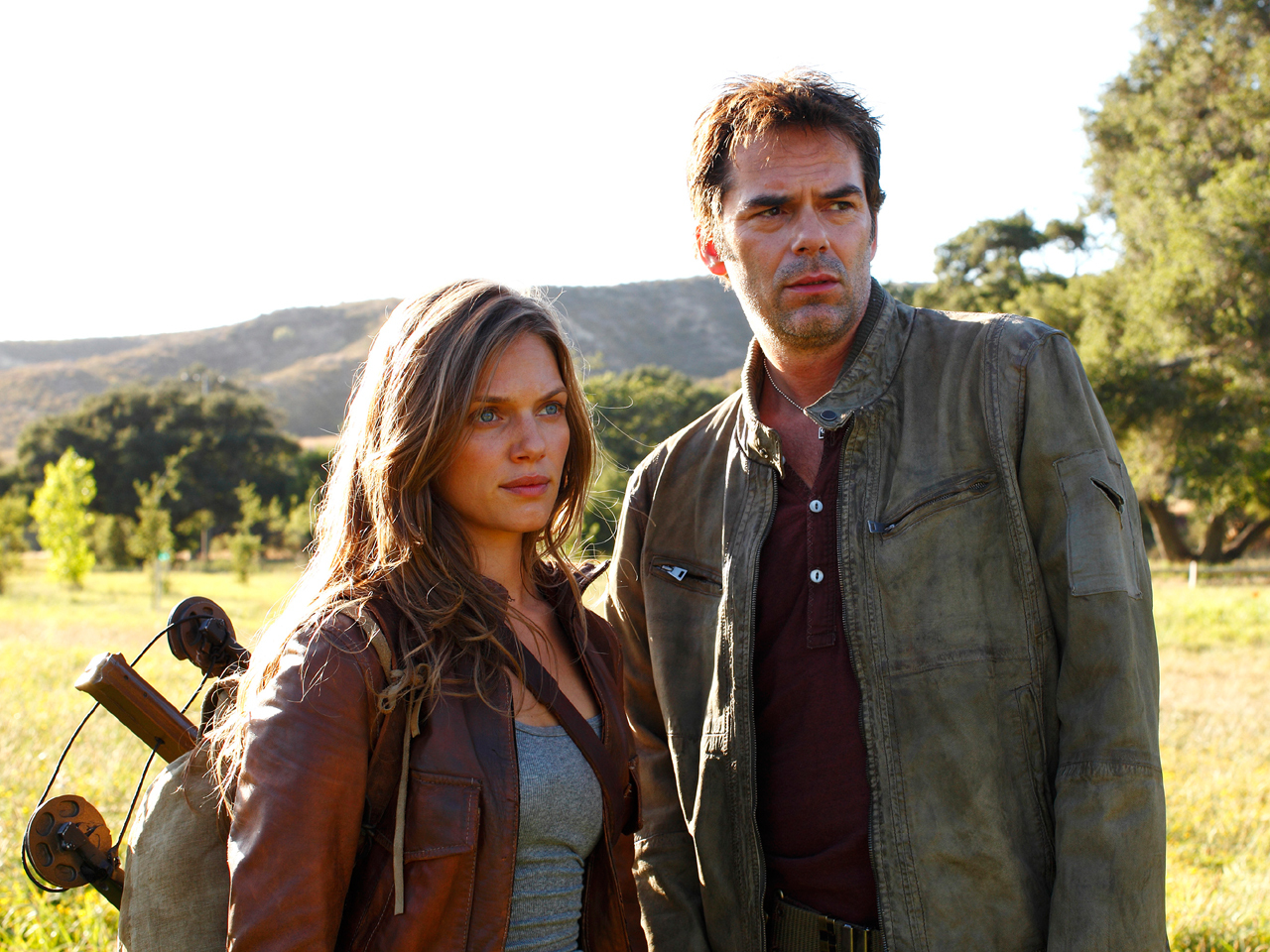 "Revolution," the post-apocalyptic drama created by Eric Kripke ("Supernatural") and with J.J. Abrams ("Lost") among its executive producers, debuted Monday night on NBC with a pilot directed by Jon Favreau ("Iron Man"), imagining a world where all the power has gone out.

We begin in Chicago, before the "blackout," in a family home where electricity is in full use. A little girl is watching cartoons, her little brother is playing with an iPad and their mother ("Lost" star Elizabeth Mitchell) is on the phone. Suddenly, their father Ben Matheson (Tim Guinee) comes bursting through the door - "We don't have much time," he says. Mom, apparently, knows what's coming. She replies, "It's happening, isn't it?"

Cut to Ben's brother Miles (Billy Burke) driving along a South Carolina highway with an as-yet-unnamed buddy. Miles gets a call on his cell phone from Ben, who tells him, "It's all gonna turn off. It's gonna turn off, and it will never, ever turn back on."

And that's just what begins to happen. The call drops, and their car stalls. Back in Chicago, the lights are flickering, but a laptop on Ben's kitchen counter is downloading some sort of file to a USB drive. It finishes just in time, and he pulls the drive out of the computer and snaps it into a triangular, locket-like pendant.

Then, everything goes out around the world - lights go out, televisions turn off, cars stall, planes fall out of the sky.

It's now 15 years later, and, we are listening to a man named Aaron telling children (and the audience) what has happened since: "After the blackout, nothing worked. Not even car engines or jet turbines. Hell, even batteries - all of it, gone forever. People starved. Sickness without medicine. Fires without fire trucks. Governments fell. Militias rose up. If you were smart, you left the city. If you weren't, you died there."

"Physics went insane. The world went insane overnight, and nobody knows why," he added.

Of course, somebody does know what happened. On cue, Ben walks out. We're in a small, agricultural village. His two children - daughter Charlie (Tracy Spiridakos, toting a cross bow and looking like she was auditioning for "The Hunger Games") and asthmatic son Danny (Graham Rogers) are older, and Mom is believed to be dead. The town doctor, Maggie, now shares his bed.

The next day, a group of militia men come into town, led by Captain Tom Neville ("Breaking Bad" villain Giancarlo Esposito). He has orders from General Sebastian Monroe, under the Monroe Authority, to bring Ben and his brother Miles to Monroe.

Ben, who gave the medallion with the secret flashdrive hidden inside to Aaron, is willing to go quietly. But Danny tries to stop them by pulling out a crossbow, and a firefight ensues, Ben is shot in the scuffle and Danny is arrested in his place. Charlie rushes back to the village, and her father tells her to go find Miles in Chicago. He insists, before dying, that Miles can save Danny.

Much of the rest of the episode focuses on Charlie - accompanied by Maggie and Aaron, tracking down her uncle. She meets a good-looking guy, Nate, who saves them from some nefarious bandits and says he, conveniently, is also headed to Chicago.

They make it to the city, and we're given some great imagery of city landmarks like Wrigley Field covered in vines. They find Uncle Miles tending bar in a hotel. She tells him Ben is dead, and asks why General Monroe wants them. Miles explains that Monroe thinks they know why the lights went out, and possibly how to turn them back on. He refuses to take part in their quest, and exposes Nate as a member of the militia.

Nate leaves to get more troops, and Miles tells Charlie & Co. to get out. They do, and Nate returns with more baddies. Armed only with a sword, Miles takes most of them down but is surrounded by others, and Charlie returns just in time to help him out. She, in turn, is saved by Nate, who appears to have had a change of heart. Nate flees, and Miles agrees to go help them find Danny.

Meanwhile, Danny escaped from the militia, but doesn't get far before he has an asthma attack. He wakes up in the home of an armed but kind woman who gives him an inhaler, which Danny has never seen before. It belonged to her son, she explains. But Neville tracks him down at the home and captures him again.

The pilot then unveils a key bit of information - Miles' car buddy from the pre-blackout flashback is actually Sebastian Monroe, now the head of the Monroe Authority.

Then, we get the episode's second great moment. After they leave, this seemingly-unassuming woman runs to a locked door in her home, opens it and heads to the attic. There, she pulls out a locket exactly like Ben's, pushes a button on it and an old computer whirrs to live. A lightbulb above the desk also illuminates. On the computer screen, she types a message: "The militia was here."

She gets a response. "Did they find it?"

Whoever's on the other end finishes the episode with a question that producers surely hope viewers are also asking: "So...what now?"

The opening and closing scenes in "Revolution" showed promise, but much of what happened in the middle was slow, and all of the characters need more development. What remains to be seen is if subsequent episodes can unravel the mysteries while still keeping the audience interested.

Tell us: Did you watch "Revolution"? Will it be a hit? Vote in our poll, share your thoughts in the comments and return here to see how it did in the ratings..