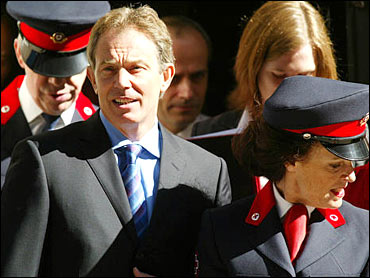 Instead of celebrating his birthday, Blair spent much of the day trying to head off a possible revolt within his ruling Labor Party over plans to give Britain's leading hospitals more autonomy.

Many left-wing lawmakers fear Blair's plans for so-called foundation hospitals could be a step toward privatizing the publicly funded National Health Service — the cornerstone of Britain's welfare state. Blair says the program will improve efficiency and boost standards.

Though The London Times reports the Prime Minister warned Labor rebels that rejecting the proposed hospital reforms would be a "mistake of historic proportions," more than 130 Labor lawmakers have signed a motion in the House of Commons opposing the plans. Many are expected to vote against the government when its Health and Social Care Bill is debated Wednesday.

The vote will be the first big parliamentary test for Blair since a record number of his lawmakers rebelled over Britain joining the U.S.-led war on Iraq. However, the government is expected to win the vote Wednesday thanks to its big majority.

Blair, who assumed office in 1997 at the age of 43, had earlier remarked in a magazine interview that he dreaded the approach of his 50th birthday.

"On that pretty unremarkable comment, a whole armada of features has been launched," Blair told a group of newspaper editors Tuesday. "You might think from the coverage that I'm the first person in history to have reached 50."

Blair was also due to spend part of his birthday in Dublin for talks with Irish counterpart Bertie Ahern on how to break the deadlock in the Northern Ireland peace process.

Blair last week canceled planned May 29 elections to the Northern Ireland legislature, from which a joint Catholic-Protestant administration is supposed to be drawn, citing the lack of a clear commitment from the Irish Republican Army to cease all hostile activities and fully disarm.

Although embattled on the domestic front, Blair received a boost from increased approval ratings in a poll published Tuesday by The Times newspaper.

According to the poll conducted by the Populus agency, Blair is seen as a better leader now than he was before the start of the Iraq war. He received an average rating of 5.75 out of 10.

Similar studies conducted in early February and early March gave Blair's leadership rating as 5.02 and 5.17, respectively. Populus did not carry out a similar poll in April, during the Iraq conflict.

Despite the surge in Blair's approval rating, support dropped for his Labor Party, which suffered a bruising in local elections last week.

Thirty-six percent of those questioned in the Populus poll expressed support for Labor, down from 41 percent during the fighting last month. However, that compared with figures of 35 percent and 34 percent for the two prewar months.

The Conservatives, who made strong gains in last week's elections, saw their support rise five points over the last month to 34 percent. The Liberal Democrats, who opposed military intervention in Iraq, were at 22 percent, compared with 25 percent before the conflict.

Populus interviewed 1,000 adults over 18 by telephone between May 2-4. The margin of error was 3 percentage points.