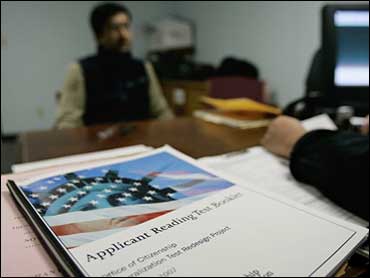 
Voters in Beverly Hills elected city council members last Tuesday. Americans from Bangor, Maine, to Bellevue, Washington, would fume if they saw the ballot. It appeared in English, Spanish, and Farsi.

That's right. U.S. citizens just days ago cast ballots published in the official language of Iran, the nation that nicknamed America "the Great Satan." See for yourself.

This bizarre outrage highlights a bigger problem: What will America do with the millions of immigrants — illegal and otherwise — who pour in across the veritable open field that is our southern frontier and through the international airports that replaced Ellis Island? Whether this parade should be accelerated, slowed, or stopped, America's immigrants should be Americanized.

As this English-Spanish-Farsi ballot vividly demonstrates, American officials and elites expect so little of immigrants that voting, studying, and even publishing official documents in foreign tongues all are increasingly routine. As this multicultural "gorgeous mosaic" has replaced the traditional melting pot, it has fueled many Americans' immigration-related anxieties.

GOP presidential hopeful Rudy Giuliani said last month that he wants to see "Americanization as part of immigration." Once our dangerously unguarded boarders are tightened — through low-tech fencing to high-tech surveillance tools — how should America handle immigrants who already are here?

America should renew its commitment to English in civic life. Speaking other languages at home and in cultural festivals like Cinco de Mayo and Chinese New Year adds color and variety to the American scene. But if we cannot communicate among ourselves in the town square, a self-imposed, Balkanesque bedlam will engulf this land.

Consequently, bilingual ballots should vanish. Immigrants are supposed to understand English before being naturalized. So why are those who are supposedly fluent in English voting in other idioms? Farsi ballots suggest that American candidates should campaign in Farsi. If American immigrants from Iran don't speak English, how will they follow the ongoing presidential race? Must Hillary Clinton or John McCain start stumping in Persian?

The Bush Administration has pushed beyond even Clinton, requiring state DMVs to have foreign-language speakers available for voter registration in languages other than English.

This is grotesque and must stop.

Fonte also would end the dual allegiance that naturalized immigrants lately have been permitted. As Fonte reports, Manuel de la Cruz took the Oath of Allegiance in which he declared, "…I absolutely and entirely renounce and abjure all allegiance and fidelity to any foreign prince, potentate, state, or sovereignty of whom or which I have heretofore been a subject or citizen…" Then, on July 4, 2004, this naturalized American won a state senate seat in Zacatecas, Mexico. De la Cruz should decide whether he is Mexican or American. Ditto for dual citizens. U.S. citizenship should not be multiple-choice, with fealty to other flags. If the U.S. ever battled Iran, for instance, for which nation would dual Iranian-Americans cheer?

Finally, through civic education, immigrants should discover and embrace America's ideals of constitutionalism, individual liberty, personal responsibility, limited government, and free enterprise. They also should understand U.S. history and respect the key individuals who shaped this nation. In 1794, President George Washington outlined his expectations of immigrants: "by an intermixture with our people, they, or their descendents, get assimilated to our customs, measures and laws: in a word soon become one people."

This is "Americanization," an admirable term every American should applaud. America revolves not around common blood or collective faith, but communal beliefs. Those who arrive and wish to stay should comprehend, absorb, and revere these ideas and the history, traditions, and institutions they inspired. This is no more radical than the words on American coins: E Pluribus Unum.
By Deroy Murdock
Reprinted with permission from National Review Online