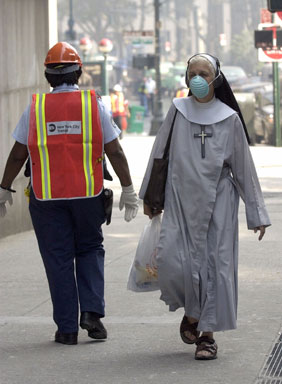 It's an anniversary we mark every ten years, but this one is special.

It's sixty-years this weekend that the allies landed on the beaches of Normandy in the invasion on which the outcome of World War II hung. What's different this time is that a lot of the veterans who are returning to Europe to commemorate D-Day know that, realistically, they may not be able to make too many more of these trips.

CBS News correspondent Mark Phillips met up with one group of returning veterans for whom age has not dimmed their memories, or their spirits.

It's been a big week for swapping war stories at the White Hart pub in the English village of Quorn.

"All of a sudden these shells started coming in," says one veteran

"We couldn't shot straight so we had to use mortars," adds another.

When it comes reminiscing about The Normandy landings, few have more bragging rights than the members of the 505th Infantry Regiment of the 82nd Airborne.

They were among the first to go in, jumping into the town of Sainte-Mare-Eglise, well behind German lines, on the night before the invasion. Theirs was the first key mission of Operation Overlord. If they couldn't take and hold the crucial crossroads on the attack's western front, the waves of Americans, British and Canadians already at sea could be chewed up by a German counter-attack before they even had a chance to establish a bridge-head.

There will be a weekend of official commemorations on the Normandy beaches involving veterans and politicians. And preparations and parades have been going on all week

But it all comes down to individual memories for the men of the 505th. Just kids then, in their late teens or early twenties, most are well into their eighties now. They've come back to the little town in the middle of England where they had been based. Back to commemorate the event they'd been part of and back for another reason as well.

"I'm 84," says Gus Drake with a laugh, he was a glider man at 80th Antitank Battalion. "You have to face up to it, hey buddy you getting too damn old."

At the laying of the wreath ceremony British and American veterans were present to officially acknowledge the sacrifice of those who never made it.

Robert 'Doc' Franco, now 90, was a young medical intern at the time and jumped in the first wave that night. Doc Franco had a charmed war, making and surviving all four of the 82nd Airborne's combat jumps of World War II.

He says, "The most important part of the whole picture, so many wonderful human beings many of whom were dead at twenty."

Doc Franco knows he's a lucky guy, saved that night by the cigarette lighter in his pocket when a shell went off nearby.

He says, "Just before we loaded our plane we were given a little Zippo lighter, and the Zippo lighter had been hit and it was smashed."

Not all the memories here are of war's horrors though. Doreen Pepper was a local girl, Shirley Hartline an American soldier. They had a bit of a fling in the months leading up to the invasion.

Hartline, of the Glider Infantry, 325 Regiment, says, "I wanted to see her, and O think it'll be the last time that I'll be able to come back.

Hartline has his memories of D-Day, and Peppers has hers.

Pepper says, "They were going over the gliders and the C46 planes, from early morning right through the day. And we all knew - we that we had boyfriends in the troops knew - what was happening long before it was broadcast. We were all very sad; we thought that we shouldn't see some of them again and we certainly didn't. But he made it."

After the war they each married sweethearts back home and raised families. Now both are widowed and, what do you know, friendship blooms anew.

Peppers says, "It's lovely to see him again after all those years. It's just wonderful, yeah, very nostalgic. We used to jitterbug but we can't now."

What they can do is remember, back on the field where they camped.

Red Delaney remembers the special equipment they were given that night that told them this was the real thing.

Delaney a paratrooper from the 505 Regiment says, "Had a silk map, a compass, and fish hooks and had francs in it. Everybody knew we were going to France," and laughs.

The veterans of the 505th Infantry will be in Normandy as well this weekend, returning as conquering heroes. Armed this time with the sort of memories that only the wisdom of sixty-years of reflection can provide.

To put in perspective just how many young lives were lost, Hartline went into France with 150 men and 5 officers. He returned with just six.