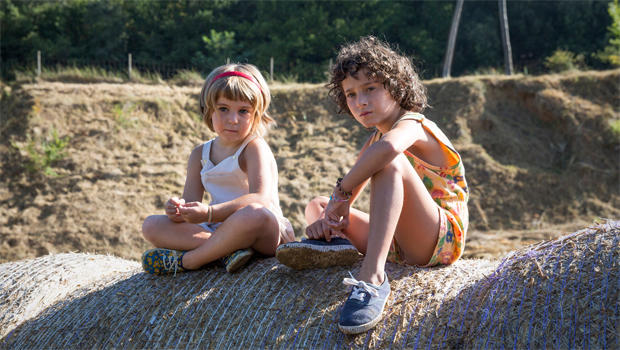 In Barcelona a household is being packed up, literally and figuratively, following the death of a mother. Her six-year-old daughter, Frida, is taken to the Catalonia countryside, to the home of her aunt and uncle, Marga and Esteve, and her four-year-old cousin, Anna.  It's a tranquil, sun-dappled house, with inefficient electricity, and a seeming haven from trauma.

Losing a parent to AIDS was not uncommon in Spain in the 1980s and early '90s, and for writer-director Carla Simón, her autobiographical film, "Summer 1993," paints a portrait not only of her own youth but of her generation. Shot in the village and at locations where she herself spent her childhood, the movie is filled with glints of a summer's memory.

The film features not large, dramatic moments of conflict or revelation, but tiny, pint-sized explosions of anger and hurt, as Frida adjusts to feelings of desertion by her mother's passing, and annoyance at having to shift her life to the contours and rhythms of her aunt's family in the country.

Both Frida and her new family must reconstruct themselves to adjust to the new circumstances. But the quiet patience of Marga and Esteve, as they open themselves up to a new child, exudes love and understanding even when Frida doesn't feel it. And when the child acts out or attempts to show her independence and rebellion, the absence of heated anger in response acts like a cooling breeze. It will be OK.

Winner of Best First Feature at the 2017 Berlin International Film Festival, and Spain's entry for last year's Best Foreign Language Film Academy Award, "Summer 1993" is a delicate and sweet story of a child finding her place in a new family – a memory piece that feels spontaneous and unhurried.

Simón's handling of her young actors, and the improvisational feel of her camerawork and editing, is exceptional. Laia Artigas is perfectly natural as Frida, and Bruna Cusi and David Verdaguer are touching as a rural couple whose home expands like their hearts.

To watch a trailer for "Summer 1993" click on the video player below.