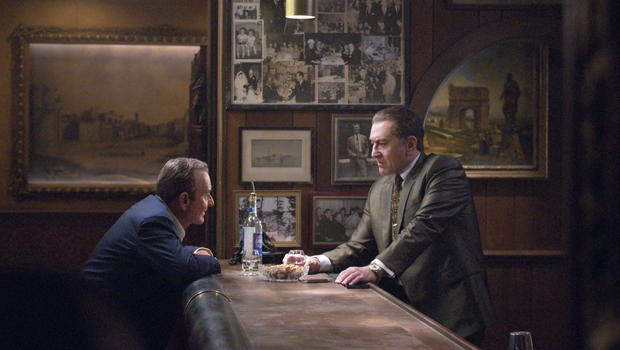 Just as one would have eagerly awaited the latest western by John Ford or thriller by Alfred Hitchcock, how could one not be dying to see the latest mob film by Martin Scorsese, the director of "Mean Streets," "Goodfellas" and "Casino"?

"The Irishman" (having its world premiere today at the New York Film Festival) is an epic story of power, loyalty and corruption spanning several decades, centered around mob hitman Frank Sheeran (Robert De Niro), the subject of Charles Brandt's 2004 book, "I Heard You Paint Houses." The film is a memoir of the sole survivor of an era where personal slights and business disagreements would be underscored in blood in barber shops and Italian restaurants, as magnified by the covers of tabloid newspapers. Sheeran's rueful and at times hilarious narration is punctuated by bursts of gunfire and the intransigent conflict among men who are often introduced on-screen with their obituaries.

A Philly truck driver who rises to become a leading figure in the Teamsters, Sheeran rides the intersection between union politics and mob money, usually as a gun-for-hire, after coming under the wing of crime boss Russell Bufalino (Joe Pesci). Sheeran's talent, apart from a willingness to throw fists, is his compliance and unquestioning attitude. "Like the Army, you follow orders, you did the right thing, you get rewarded," he recalls.

Sheeran also becomes a virtual aide de camp to Teamsters president Jimmy Hoffa (Al Pacino). Hoffa's hotheaded temperament endangers him from the Justice Department, while his unwillingness to play ball with the mafia endangers him among certain men smelling profit off of the union's substantial coffers. As the union's leadership becomes inextricably intertwined with criminal families, mob parlance and code become the film's lingua franca, such as when an order for a hit is determined to be an intractable fate: "It is what it is."

Sheeran's reticence ran to the end of his life, when he finally spoke of his role in some of the mob's most notorious actions, from the assassination of "Crazy Joe" Gallo at Umberto's Clam House in New York City in 1972, to the disappearance of Hoffa three years later. A sign of the schism in Sheeran's morality, that tears at his family life every time he walks through the door on his way to or from a job, is his willingness to kill a mob figure in front of the man's wife and kids. "They should have to see what it's like," he tells us. And Scorsese shows us in an unblinking manner what people like Sheeran are capable of, though he is also willing to let the camera drift off to the side while blood is shed.

Scorsese's technical mastery is undeniable, and while there are some callbacks to his earlier work (his Steadicam glides through an old folks' home with as much sense of place as it did the Copacabana in "Goodfellas"), and the period detail is exceptional, the defining characteristic of "The Irishman" is the space the director gives to De Niro, Pesci and Pacino to strut their stuff, creating characters representing the human capacity to demonstrate loyalty, or disloyalty, at sometimes painful personal cost.

And that space he gives them is considerable. With a running time of 3.5 hours, "The Irishman" is an epic the length of a TV mini-series (which makes its eventual home on the Netflix streaming service understandable), but on a scale that deserves to be seen on a large screen, thanks to the cinematography of Rodrigo Prieto ("The Wolf of Wall Street," "Silence").

The acting is splendid across the board. Pacino in particular chews his meaty role with relish – his Hoffa is a human being with an indefatigable drive for acquiring and holding power, and a bottomless reserve for dispensing invective against any who would disrespect him in the most tangential or minuscule way. (Do not be 10 minutes late to a meeting, or wear shorts!)

Pesci, who has been missing from screens for too long, is far from the hot-headed Tommy DeVito in "Goodfellas." His Bufalino is a calming influence, a graceful elder to whom deference is given (and envelopes of cash delivered), and a wizened, instructive mentor to De Niro's Sheeran, which makes his undisputed commands to kill all the more chilling.

De Niro, playing a more cagey and reticent figure who speaks through his actions, uses his eyes to convey the tortured moral conflict he feels when friends are to be betrayed. His propensity to violence alienates him from his daughter, Peggy (played as a child, with delicious side eye, by Lucy Gallina, and as an adult by Anna Paquin), and sets in motion his desire to seek some form of redemption in the final act of his life.

Shot on both film and digital, and masterfully edited by Scorsese's longtime collaborator Thelma Schoonmaker, the movie makes substantial use of CGI effects as part of a "de-aging" process that allows its lead actors' performances to span decades. De Niro himself is seen from age 20 (killing German soldiers in World War II Italy) to his 80s. If they ever decide to remake "Taxi Driver," he could play Travis Bickle again.

After screening Friday, Saturday and on October 13 at the New York Film Festival, "The Irishman" opens in select theatres on November 1, before streaming on Netflix beginning November 27. Rated R (for pervasive language and strong violence). 209 minutes.

To watch a trailer for "The Irishman" click on the video player below: