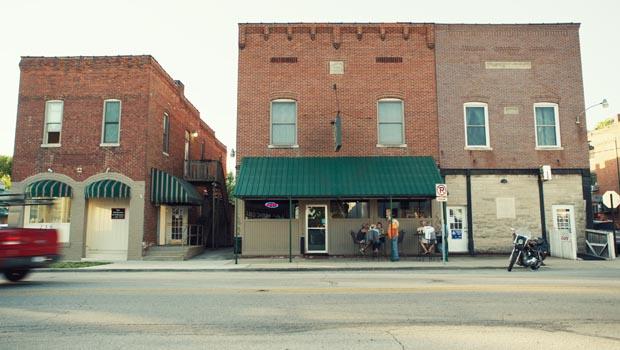 In a career spanning more than 50 years, veteran filmmaker Frederick Wiseman has pioneered the fly-on-the-wall style of documentary. With no voiceover narration or intrusions by an interviewer, his films merely pull the viewer into the world he's visiting – a mental hospital, a school, a housing project, a slaughterhouse, the New York Public Library – and allow us to observe humanity. The narratives we witness are the small day-to-day dramas that occur during the unceasing movement of time when most of us aren't watching.

What we observe during the two-plus hours of his latest film, "Monrovia, Indiana," is a rural Midwest town struggling to stay vital in the 21st century. The issues brought before the town council (allowing developers to build 151 new homes, stressing the county's existing infrastructure; tiffs over zoning regulations and municipal water use) reveal the allegiances that some residents have to the town's agrarian, small town traditions, against those arguing for progress that promises a bigger tax base but which may bring crime and other stressors with it.

And it is a very small town. Population 1,063, less than two square miles in size, Monrovia is about a half-hour outside of Indianapolis, and far from the pace of a big city. We witness the daily rhythms of residents at Café on the Corner, Dawg House Pizza, Slingers Tattoo, the Class Act Hair Salon, the Guns & Ordnance shop. And we see the cornfields, the ever-rolling cornfields.

Because there is no omniscient guide, some of what we see may baffle us. [Why is the farmer spraying purple dye on the backs of some pigs and not others? … Oh.] But the entire film is an introduction to the very character of a small town where the annual Monrovia Festival features fiddle players and women selling hemp and tie-dyed T-shirts side by side.

Politics, at least on a national level, in invisible here, because the only politics we see is local, whether it's arguments over a developer being allowed to pave a road or the local Lions Club voting on whether to install a commemorative bench outside the library. Because these things matter.

How much? A lot, it seems, or not much. It depends on the residents' daily concerns, which might entail going to physical therapy after surgery, having a truck fender repaired, buying dinner, having a boxer's tail docked at the vet, or, for one very lucky senior, having your 50 years' membership in the Masons honored at the local lodge by other members who seem unsure (or at least unpracticed) in how to do so.

Shot over nine weeks, the film shows the town's landmarks, like the high school (how could we not empathize with the yawning teenage girl sitting through her teacher's lecture about the town's basketball legends from two or three generations past?), the church (the site of weddings and memorial services), and the cemetery.

Some of Wiseman's past films have taken a leisurely pace (his 1989 "Near Death," filmed in a Boston hospital, is six hours long), but "Monrovia, Indiana" is pretty fleet of foot, rarely staying in one place, on one camera angle, for long before picking up stakes and seeing what else there is just down the road to see or hear (like the school band's not-terrible rendition of "The Pink Panther" theme, or butchers processing ground beef at the local supermarket). And for such a tiny town, there's a surprising amount to see.

You walk away from "Monrovia, Indiana" as a tourist with a little keener understanding of the work and effort that goes into making a small town tick, and you find (like watching a Wiseman film) patience has its rewards.

After bowing this weekend at Film Forum in New York City and the Hot Docs Ted Rogers Cinema in Toronto, "Monrovia, Indiana" (distributed by Zipporah Films) will open in Los Angeles, Chicago, Minneapolis, San Francisco, Miami and other cities (as well as in theatres across Indiana) in November. The film is not rated. 143 minutes.

To view a trailer for "Monrovia, Indiana," click on the video player below.