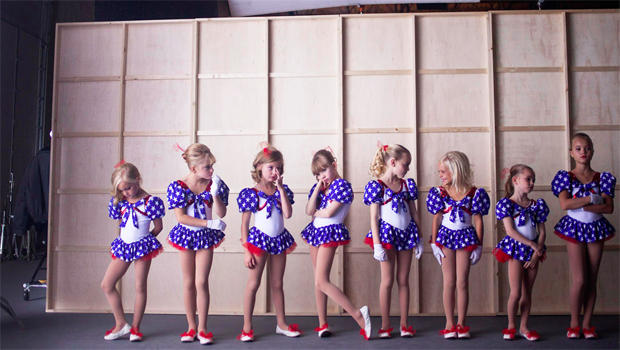 Twenty years after the body of six-year-old JonBenét Ramsey was found in her home in Boulder, Colo., her still-unsolved death continues to spawn a cottage industry of tabloid sensationalism. And while Ramsey's family is no longer in Boulder, the community continues to grapple with the ramifications of JonBenét's murder and the media firestorm that inundated the city.

With the criminal investigation into her death unable to finger a culprit, everyone in Boulder, it seems, has an opinion or speculation about the innocence or guilt of the girl's mother, father, brother, or other local figures. Their eagerness to find a resolution to the mystery is as salient and enticing as the confounding facts about the case (from the three-page handwritten ransom note, the parents' media interviews and a false confession to the untraceable DNA found on the little girl's clothes).

An unconventional, highly-stylized and thoroughly gripping documentary about the case, "Casting JonBenét" (playing in select cities and also available via Netflix) avoids the typical true-crime story parameters and steers instead into the choppier waters of the public's morbid fascination about the case. In doing so, it highlights how the Ramseys' neighbors interpret JonBenét's life and death while imposing their own personal traumas or quirks onto her family.

Australian director Kitty Green previously directed the prize-winning short film, "The Face of Ukraine: Casting Oksana Baiul," in which young girls from the war-torn country were asked to recreate a national star, the figure skater Oksana Baiul, and her tearful Olympic victory. It was a means to explore the concept of celebrity without resorting to the source. "All my films are about women and their representation in the media," Green told CBS News.

She then took the concept and applied it to the horrific murder of JonBenét, a case which had fascinated her since she was a young girl in Melbourne.  "I used to watch 'Full House' and 'The Brady Bunch' -- I had this very idealized idea of what American life was like," she said. "And so this crime kind of punctured that image for me. What went so wrong? How did this happen to kind of a perfect family? That I was very curious about as a kid, and it stuck with me.

"Always when I meet someone from Colorado, I'd ask, 'Who killed JonBenét Ramsey?' And they'd roll their eyes at me! But at the same time they always had a theory, which I thought was interesting, and the theories were quite wide-ranging."

"Casting JonBenét" is unlike other films or TV specials about the case, in part because it contains no images of the real people involved. Instead, Green posted ads for open casting calls and invited Boulderites to come audition to play the roles. Their audition tapes, in which they discuss their own speculation about the behavior of the family and the motives of the possible killer, make up the brunt of the documentary.

"You sit them down and say, 'What do you know about the Ramsey case,' and immediately they'll say, 'Well, my mother had bipolar disorder, so I think Patsy must have done A, B and C,' and they've come up with a theory based on their own personal experience," Green said. "We didn't even push them in any direction.  It was very natural for them to link all of their own emotional trauma, their own kind of questions, to this case. How do you make sense of an unsolved case, something where there's more questions than answers? How do you find closure? How do you move forward? I think you often look inward. You draw parallels with your own life and then decide that's where they were coming from."

We therefore see dozens of fulltime, part-time, aspiring or non-actors, each offering the reasoning behind how they might play the character, as well as gossipy chatter about the actors' own lives -- their pet peeves, ambitions, dislikes, personal histories, loved ones who had mysteriously died, just like JonBenét! -- that tells us more about how a media firestorm can brew than any clinical dissection of TV ratings and page views.

About 200 people were interviewed, and 72 made it into the film, both in their audition tapes and in the documentary's final scenes, in which a stage set, built to represent the Ramsey's home, is populated with multiple Patsys, Johns and Burkes, and one JonBenét, each acting out their particular interpretation of what they believe happened in the house that night.

Green did not set out to "solve" the case, and despite her extensive research doesn't believe she knows who was responsible for JonBenét's murder.  But she was surprised to find how closely the community's beliefs about the Ramsey case mirrored that of the media, especially in its attacks against the mother, Patsy, who died from cancer in 2006.

"Patsy was definitely crucified by the media, and so I was interested in seeing how that was reflected in the community, but definitely they, too, held similar opinions," Green said. "They were definitely very judgmental about JonBenét [being entered] in beauty pageants.  The pageant system is not very big in Colorado, so the activities with which she raised JonBenét were different from the way a lot of Colorado woman would have raised their children. So there was a lot of criticism surrounding that. They weren't that judgmental about the father; nobody had many critiques about the way the father raised his child.

"But the surprising thing to me was how much more real and raw and human the film is than I thought it would be. The interviews were so heartbreaking and emotional -- people went to places I really didn't think they'd be able to go to. They're not Hollywood actors; they're tapping into something real and human.  They're just being themselves in some ways, reaching into their own kind of turmoil and bringing it all out onto the stage."

And the reaction to her cast after filming their scenes on the Ramsey home set? "It was a heavy day," she said. "I think it was quite cathartic and therapeutic for people.  It felt like they'd gotten something out of it, and found it."

The film's experimental nature, while ostensibly removing us from the real figures in the case, actually pulls us closer in to the story's drama, by deftly revealing multiple layers of fear, anger, jealousy and grief, compounded by the recognition that no one will ever truly know what happened in that house on Christmas night in 1996. In the end, a community's obsessions about a little girl's untimely end becomes about them all.

"Casting JonBenét," which debuted at this year's Sundance Film Festival, is currently playing theatrically in select cities (including New York City and Santa Monica, Calif.) and will screen Sat., April 29 at the Montclair Film Festival in New Jersey. It is also available to stream on Netflix. 80 mins. The film is not rated.

To watch a trailer for "Casting JonBenét" click on the video player below.