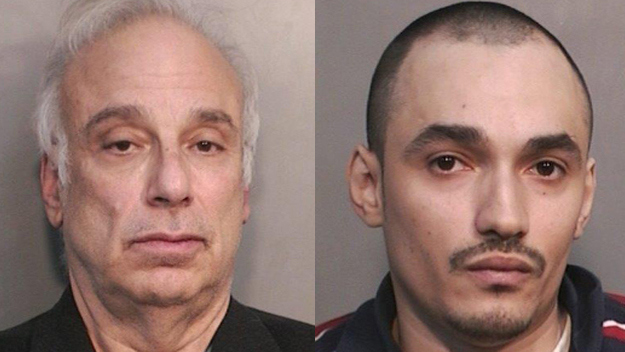 MINEOLA, N.Y. -- A New York priest whose sister was beheaded by her son in 2014 was arrested Wednesday on drug possession charges after he was caught with crack cocaine, police said.

Rev. Robert Lubrano pleaded not guilty to charges of criminal possession of a controlled substance after being arrested at a motel in Bethpage, Long Island, early Wednesday morning.

The 63-year-old Lubrano, who police say is a Roman Catholic priest but isn't currently working at a church, was arrested after officers conducting a separate narcotics investigation saw him exchange cash with another man in the motel's parking lot, police say.

An officer followed Lubrano to his hotel room and found him with about 800 milligrams of a "rocklike substance believed to be crack cocaine" and a metal pipe that contained cocaine residue, Nassau County Police Det. Lt. Richard Lebrun said at a news conference.

"I have been smoking crack cocaine ever since my sister was murdered," Lubrano told police, according to court papers.

Lubrano's sister, Patricia Ward, was killed in October 2014 by her son, who had a history of psychiatric problems. The 66-year-old professor at Farmingdale State College was decapitated and her lifeless body dragged into the street by her son in front of their home before he walked in front of an oncoming train.

"Ms. Ward did meet a very violent end to her life at that time," Lebrun said. "I'm sure it was a very horrible circumstance, but people cope in different ways."

Lubrano was released without bail after his arraignment. A woman who answered the door at Lubrano's home in Farmingdale on Wednesday afternoon said he had no comment. A spokesman for the Diocese of Rockville Centre said Lubrano has been on leave for five years.