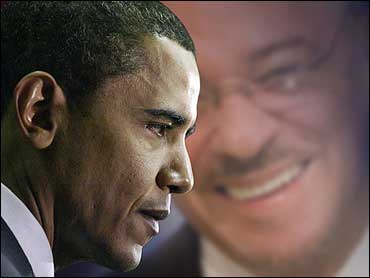 President Barack Obama's longtime minister, the Rev. Jeremiah Wright, gave an assessment Thursday of his former congregant's short time in the White House: Obama is just like any other president.

Speaking in a brief interview with The Associated Press before giving a speech at a civil rights landmark, Wright smiled at the mention of the name of the nation's first black president.

"He's like any other president," Wright said. "He's a politician and he's got to do what politicians do."

Wright's remarks were similar to those he made after his fiery preaching became a campaign issue last year, forcing Mr. Obama to distance himself from his longtime pastor at Trinity United Church of Christ in Chicago.

Mr. Obama resigned from Trinity United and, ultimately, cut ties with Wright because of the uproar caused by videotaped snippets of some of Wright's sermons, in which he shouted "God damn America" and accused the government of creating AIDS.

On Thursday, Wright was addressing more than 700 people at a mass meeting that kicked off the 44th anniversary celebration of the 1965 Selma-to-Montgomery voting rights march.

The event was held at Tabernacle Missionary Baptist Church, site of the first mass meeting that led to the watershed voting rights movement in Selma.

During his address, Wright cautioned against putting too much faith in Mr. Obama.

"Barack's name ain't Jesus. Barack ain't gonna improve your child's reading score. There are things we've got to do on our own," he said.

Mr. Obama may no longer associate with Wright, but the program for the event featured a picture of the two, smiling together, on the front.

"I am offended by the vehemence of Wright's commentaries on race in America. President Obama was similarly offended," Davis said in an open letter to event organizers at the National Voting Rights Museum and Institute. Davis represents the state's 7th Congressional District, which extends from Birmingham to rural west Alabama.

A leader of the weekend-long commemoration, museum consultant Sam Walker, said Wright was invited to Selma not for his role in the election but for his decades of civil rights work.

"He's just been out there in the movement for 40 years. Forty years is more than was captured in one 10-second snippet," said Walker.