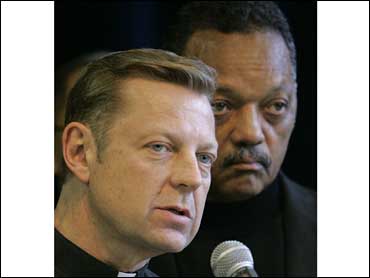 The Rev. Jesse Jackson was arrested Saturday at a demonstration outside a suburban Chicago gun shop and charged with one count of criminal trespass to property.

The civil rights leader was arrested when he refused to move away from the entrance to Chuck's Gun Shop in Riverdale, police said. He has protested with other community activists outside the shop in recent weeks after a 16-year-old honor student was gunned down on a city bus.

Police said the shooting was gang-related but the teen was not the intended target.

Jackson, who says the gun shop's proximity to Chicago provides gang members and criminals easy access to firearms, has used the protests to call for stricter gun laws.

The Rev. Michael Pfleger, a Catholic priest who oversees a congregation on Chicago's South Side, also was arrested and charged with Jackson.

A message seeking comment from the gun shop was not immediately returned Saturday afternoon.

Two teens have been charged as adults with taking part in the May shooting of Blair Holt, an honor student at Julian High School.

Editor's Note, Tuesday, June 26, 2007: This story was originally published with a file image of Jesse Jackson at an unrelated event. We have since obtained what we feel is a more appropriate image for the story and have replaced the original image.