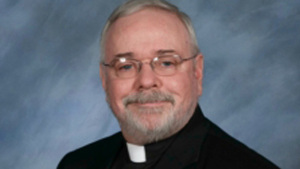 (CBS/AP) LOWELL, Mass. - Rev. Arthur Coyle, a high-ranking priest with the Roman Catholic Archdiocese of Boston, has taken a voluntary leave of absence after being accused of soliciting a prostitute.

Authorities say Coyle was granted $500 bail after pleading not guilty Monday in Lowell, Mass. to a count of sexual conduct for a fee.

Police say the 62-year-old Coyle was arrested Sunday after he was allegedly found with a prostitute behind a cemetery in Lowell.

The Boston Archdiocese says Coyle will remain on administrative leave, pending the outcome of the case. He's prohibited from performing any public ministry during that time.

Coyle was ordained in 1977 and has been the Episcopal vicar for the Merrimack region since 2008, meaning he oversees several parishes in the area. He lives at the rectory of St. Rita's parish in Lowell.