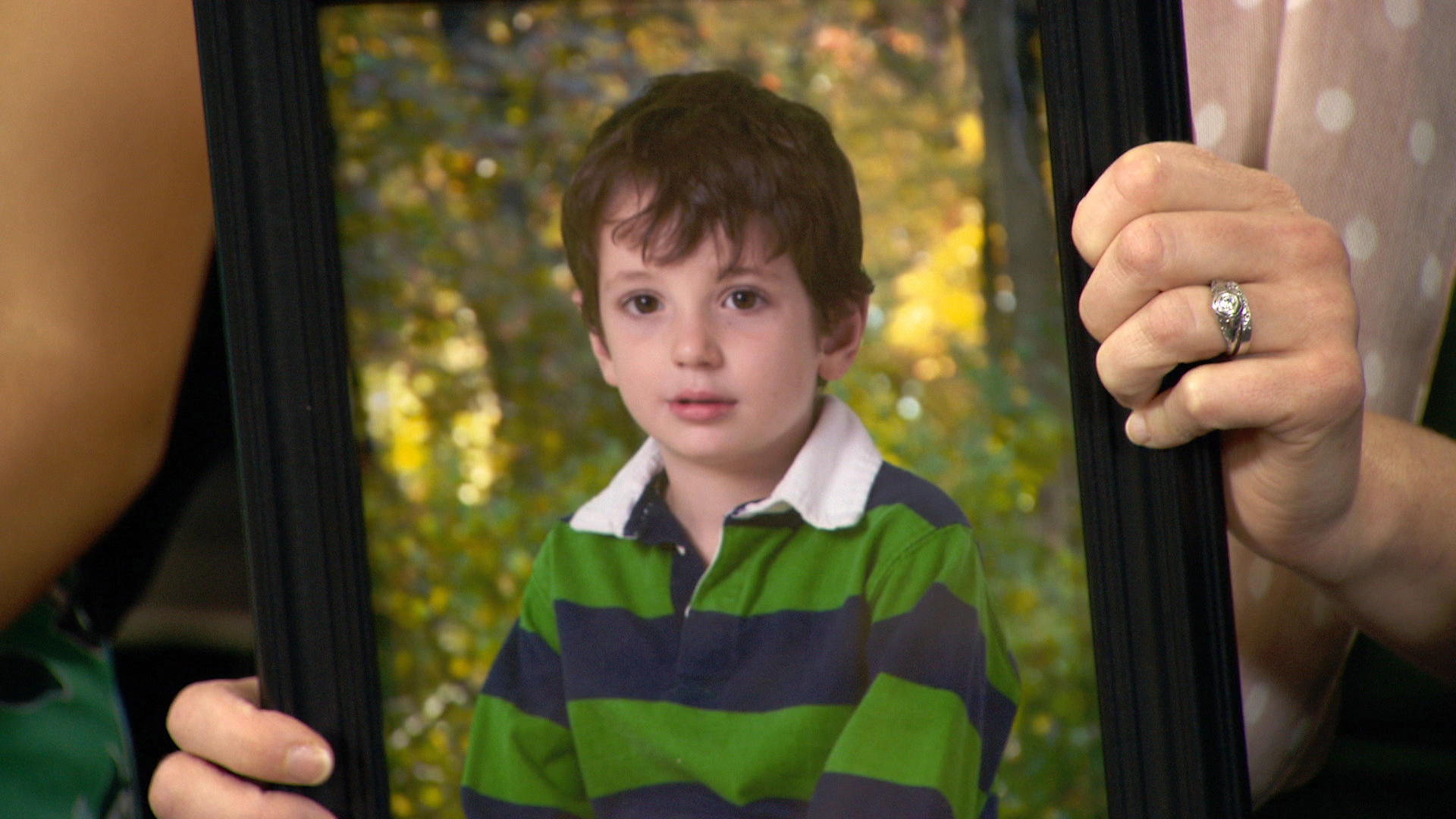 There is no word in the English language for a parent who has lost a child. Maybe it's an abyss that we can't bear to make real by giving it a name. Bereaved parents feel that life itself lacks definition. What could be next for them? What could be worthwhile? A little over four years ago, we met mothers and fathers who sent their first graders to school one bright morning and have endured the twilight ever since. When we returned to Newtown, Connecticut this past spring, we found those families will never move on but they are finding ways to move forward.

Newtown looks as it did the day before that day. The name is long outdated; it was founded before the revolution, its flag pole raised after the Civil War, and its town hall erected in the Great Depression. But, for those who know only the name, the history of Newtown, Connecticut, begins on December 14th, 2012, when a mentally ill man murdered 20 first-graders and six educators at Sandy Hook Elementary School. Ana Grace was the daughter of Nelba and Jimmy Greene.

Scott Pelley: Have you found people who don't know you after all these years, expecting you to get over what happened?

"In the back of my heart and I know in Nelba's, as well, it's like our family will never be intact again." Jimmy Greene, Ana's dad

Nelba Márquez-Greene: You just took my breath away because that happens a lot and it is so incredibly painful. It's like losing her all over again.

Jimmy Greene: There have been those that have said things like, "You know, so you guys are good now?" Or "I hope you've had some closure to your daughter's murder." In the back of my heart and I know in Nelba's, as well, it's like our family will never be intact again.

It was in that town hall, four months after the killing, that we first met the Greenes and six other Newtown families.

Jimmy Greene: Every day I cry because I miss her so much.

Nicole Hockley: This is Dylan.

There was Nicole Hockley.

Nicole Hockley: I think the picture kind of sums him up perfectly.

Mark Barden: Daniel was a light of positive energy in our home.

David Wheeler: And our house is very quiet…

David Wheeler filled that "quiet" with a shout to every parent.

That week, several of the families convinced the Connecticut legislature to pass universal background checks and to limit the size of ammunition magazines. Then, they marched on Washington to support a more modest proposal -- just closing the loopholes so that all purchases require a background check.

Nicole Hockley: I stand before you now and ask you to stand with me.

Polls showed most Americans stood with them and so did the president.

In the Senate, they needed 60 votes.

But not even they could win a gun fight on Capitol Hill.

Nicole Hockley: When it was clear that they had lost it was like all the air went out of your body in one quick swoosh. 'Cause that gut-wrenching defeat, how could, how could this have just happened?

Scott Pelley: Wasn't there a sense after that vote of, "OK, we tried. I'm going home"?

Mark Barden: Not for me.

Nicole Hockley: Never. Why would we do that? That that's not honoring our children. There is a saying, you know, fall nine times, get up 10. We'll just keep getting up.

So Nicole Hockley and Mark Barden founded Sandy Hook Promise to train teachers and students how to prevent violence. It was a revelation for Hockley after the FBI told the families that the gunman had been on a predictable path.

Nicole Hockley: And I remember asking the question, "Well, if you know these things about shooters, if you know that these signs and signals are given off, how come we don't know?" And the director said, "We just don't have the resources to train everyone in the country. We train law enforcement. We train -- other people. But we can't do it out to the mass public." And for me, that was the moment that I said, "Well, if you can't, we can."

Hockley spends half the year on the road, visiting schools, telling teachers and students how to spot the signs of social isolation.

Nicole Hockley: It's these tiny actions that we can each take that you all have the power to do that are going to change someone's life.

One program called "Start with Hello" trains students to connect with their peers who are ignored or bullied.

Mark Barden: It means so much to us that you're here and you're doing this.

Another is "Say Something" which encourages kids to speak up.

Students are taught to watch for sudden changes in their classmates, a fascination with suicide or death or guns; changes in dress; or threats on social media. In 2015, Mark Barden trained students in Cincinnati. And shortly thereafter, a middle-school student made a bomb threat.

Nicole Hockley: And it was overheard by another student who had been trained in our "Say Something" program.

Mark Barden: This 8th grade student said, "I wouldn't have thought twice about what I saw in social media until I had your training and I said, 'This is exactly what they're talking about.'" It gives me goose bumps just to think about it.

Sandy Hook Promise says it has trained more than a million students and teachers but its had more reach on the Internet.

This video called "Evan" shows two students making a connection. But harder to spot in the background is what's happening to a troubled young man.

Scott Pelley: If this program had been in place at Sandy Hook Elementary School the day before, do you think it--

Nicole Hockley: You read my mind. Sandy Hook was preventable. And had someone been able to see those signs and signals that our shooter gave off throughout his life, and connect those dots, and make an intervention, I wouldn't be sitting here talking to you today.

"The worst thing you can do to a grieving parent is not to mention the child.  Then you're not acknowledging his existence." Francine Wheeler, Ben's mom

A parent who has lost a child has one fear left -- the end of remembering. And so many of the families have created projects that introduce their child to new people. Ben Wheeler now lives in the work of Ben's Lighthouse, his mother, Francine, creates service projects for Newtown kids.

Francine Wheeler: What a wonderful way to honor him and continue to be his parents.

Scott Pelley: Continue to be his parents?

Francine Wheeler: Yeah. I can't live the rest of my life not talking about him. I mean, imagine you having a 6-year-old, and then you don't anymore. Are you going to stop talking about them? The worst thing you can do to a grieving parent is not to mention the child.  Then you're not acknowledging his existence. And so when people do acknowledge it, I'm so appreciative. I say, "Oh, thank you for--" and even if I'm crying, they're like, "I'm sorry I made you cry." I'm like, "No, you didn't make me cry. You brought him back."

"You try to make the world into the place you want it to be and many times the only area you have any control over is the square footage of your own house." David Wheeler, Ben's dad

David Wheeler: It's like having him back for a minute.

The Wheelers wanted another child, a sibling for their oldest. And almost two years after Ben was killed, Matthew Bennett Wheeler was born.

David Wheeler: You try to make the world into the place you want it to be and many times the only area you have any control over is the square footage of your own house. And so you do what you can.

David Wheeler is a songwriter and recently, at a vigil against gun violence, Francine sang, "Leave a Light on."

Francine Wheeler: "You know I will leave a light on." Because you always look for your home after this kind of craziness that happens to you. Where is your home? And he leaves that light on so that I can have a home in my heart for him.

At that vigil we met Hannah D'Avino. Her sister, Rachel, was a therapist in Ben Wheeler's class.

Growing up, her big sister had been the strong one in a troubled home and so D'Avino says she lives today in purgatory—not quite the present.

Hannah D'Avino: A lot of it is because I feel guilty for being alive and happy when my sister's dead.

Scott Pelley: Rachel was your stability.

Hannah D'Avino: Yes, she was. She really was.

Scott Pelley: You know, I wonder when you hear of the next shooting, how does that affect you?

Hannah D'Avino: I go back to my day one. I go back to 12/14, not knowing where my sister was, looking for her. And you see people getting that reuniting hug. And that breaks my heart, 'cause I wish I got that hug. And then you see the people that are really distraught, because they're in this club now.

Scott Pelley: Nicole, how would you describe the change in yourself?

Nicole Hockley: You couldn't be any more different from the confident, optimistic, happy-go-lucky type person I was beforehand.

Scott Pelley: You have poured yourself into this so completely.

Scott Pelley: Have you given yourself time to grieve?

Nicole Hockley: No. No. I'm working on that right now. This is kinda my year that I'm feeling is, it's time, you know, to start finding myself again but also to accept that no matter what I do, I can't get Dylan back.

Jimmy Greene summons his daughter's memory through his music. His album about Ana Grace was nominated for two Grammys.

Nelba Marquez-Greene is a therapist. And she has started the Ana Grace Project to educate teachers about mental health.

Scott Pelley: You mentioned your faith and I wonder how your faith may have changed in all of this?

Nelba Márquez-Greene: One of the most compelling sermons I've ever heard was given at my daughter's funeral. It was just a beautiful sermon. It talks about Jesus being with us in every season of our lives, including the winter. And that Ana's death would signify the beginning of a long and hard winter season. And that winter would be made better with faith and family and friends. And I still feel that way. I really do.

Scott Pelley: Is it springtime yet?

Sandy Hook Elementary School was demolished and rebuilt -- much like the families themselves, changed yet in the same place.

The strategy behind the economic sanctions against Russia