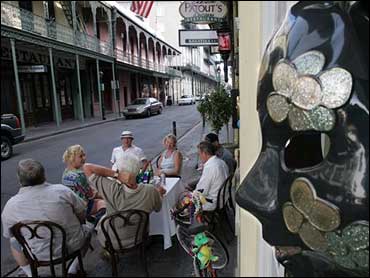 It wouldn't be a Saturday night in New Orleans without the neon lights of Bourbon Street.

The lights unexpectedly flickered on in part of the French Quarter at sundown Saturday, even though the mayor had said it would be more than a week before the city reopens the neighborhood known for its raucous nightlife.

That didn't stop Eric Clark from readying the three strip clubs he manages along Bourbon Street to open Monday. "We'll have a few girls here," he said, "some bartenders, some ice for cold beer."

But for many business owners returning to New Orleans on Saturday, the damage left by looters and the rotting food they found in once-gleaming restaurants indicated hopes for a quick recovery may be too optimistic.

But many residents, from the cast-iron balconies of the French Quarter to the white-columned mansions of the Garden District, said it would be weeks, if not months, before they are ready again for partying till dawn.

"We don't want a bunch of tourists in here while we're trying to get our homes together, get our businesses together," said Sandra Cimini, whose family owns a bar on Chartres Street. "It's not going to be walking down the street with a hurricane glass in your hand until we can get everything together."

Earlier in the day, Margaret Richmond stood with tears streaming down her face as members of the 82nd Airborne Division used a crowbar to pry open the door of her looted antiques shop on the edge of the city's upscale Garden District.

The store, Decor Splendide, had been looted in the chaotic days that followed Hurricane Katrina. Antique jewelry, a cement angel with one wing broken off and lamps were lying scattered on the floor. Someone had wedged a piece of metal in the door to jam it closed, hoping to deter other looters.

"What they didn't steal they trashed," Richmond said, gazing through a window of her shop, before the soldiers were able to break open the door. "They got what they could and ruined what they left."

It was a scene repeated over and over as business owners were allowed back in to some sections of the city to begin cleaning up and rebuilding.

Mayor Ray Nagin said this week that he wanted to prepare some of the flood-ravaged city's dry sections for the return of up to 180,000 residents over the next two weeks. His goal was to begin the city's revival by resuming a limited amount of commerce.

But the head of the federal disaster relief effort said Saturday that the plan raises concern because of weakened levees, lack of drinkable water and heavily polluted floodwater.

Coast Guard Vice Adm. Thad Allen said federal officials have worked with the mayor and support his vision for repopulating the city, but he called Nagin's idea to return up to 180,000 people to New Orleans in the next week both "extremely ambitious" and "extremely problematic."

"Our intention is to work with the mayor ... in a very frank, open and unvarnished manner," Allen told The Associated Press in an interview at Department of Homeland Security headquarters in Baton Rouge.

Nagin defended the plan in a statement issued late Saturday, saying it was developed in cooperation with the federal government and "properly balances safety concerns and the needs of our citizens to begin rebuilding their lives."

Allowing businesses to reopen "is key if we are going to realize our common objective: to bring New Orleans back," Nagin added.

Business owners, facing damage that could take months to repair, said hopes for a quick recovery may be little more than a political dream.

"I don't know why they said people could come back and open their businesses," said Richmond, whose insurance policy will cover the lost merchandise. "You can't reopen this. And even if you could, there are no customers here."

The Wal-Mart store in uptown New Orleans, built within the last year, survived the storm but was destroyed by looters.

"They took everything, all the electronics, the food, the bikes," said John Stonaker, a Wal-Mart security officer. "People left their old clothes on the floor when they took new ones. The only thing left are the country-and-western CDs. You can still get a Shania Twain album."

If the store had not been looted, it could be open in two weeks, Stonaker said. Now he doubts it will be open by January.

"They'll have to gut it and start over," he said.

Uptown, including the historic Garden District neighborhood is scheduled to reopen next week.

Nagin said he wanted the French Quarter open for business by Sept. 26, but city officials have since backed off setting a date for reopening New Orleans' oldest and most famous neighborhood, the main draw for tourists.

All the areas to be reopened in the week ahead were spared Katrina's flooding. Electricity and clean water have been restored to some sections.

Meanwhile, President Bush on Friday ruled out raising taxes to pay the massive costs of Gulf Coast reconstruction, saying other government spending must be cut to pay for a recovery effort expected to swell the national debt by $200 billion or more.

The chairman of Bush's National Economic Council, Al Hubbard, made clear that Hurricane Katrina recovery costs are "coming from the American taxpayer." Another top aide, domestic policy adviser Claude Allen, said the administration had not identified any budget cuts to offset the disaster expense, and Bush did not name any either.

Congress already approved $62 billion for the disaster, but that is expected to run out next month and require another budget-busting installment. The federal deficit was projected at $333 billion for the current year before the storm slammed into the Gulf Coast more than two weeks ago.

Bush, who declined to try to put a price tag on the costs, expressed no worry.