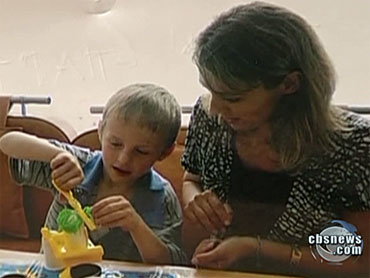 The return of a child to Russia by his adoptive American mother has angered Russian officials and raised troubling questions about the mother in her hometown of Shelbyville, Tenn. CBS News correspondent Whit Johnson has more.

Seven-year-old Artyom Savelyev is at the center of a growing international incident between russia and the united states. Artyom was put on a plane by himself last week, with a one-way ticket back to Moscow and a note from his adoptive mother, 33-year-old Torry Hansen.

"I am sorry to say that for the safety of my family, friends, and myself," the letter said, "I no longer wish to parent this child. As he is a Russian national, I am returning him to your guardianship."

She also said, "He is violent and has severe psychopathic issues"

The State Department says Russia's reaction is troubling but understandable.

"If Russia chooses to suspend these adoptions … that is Russia's right," State Department spokesman P.J. Crowley said. "We would like to see these adoptions continue but we understand the concern that Russia has; we share that concern."

"This child could've been placed with a qualified, licensed agency for placement services," said Debbie Robinson of Miriam's Promise Adoption Agency in Nashville. "Somebody like us, or Catholic Charities, could've found a family."

And some in Hanson's hometown are calling her actions criminal

"They ought give her some jail time," one resident said.

Hanson has not been seen since late last week, but has been in touch with the sheriff through her mother and her attorney.

There are reports from Russia that three families have now stepped forward to adopt Artyom.