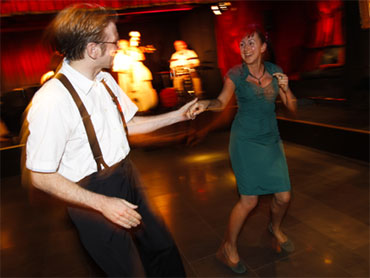 In 21st century Berlin, the Roaring Twenties are in.

The era when avant guard artists and expressionist theater influenced the political tone, women cut their dresses and bobbed their hair and couples danced to the frenzied moves of the Lindy Hop or Swing is recreated in clubs and ballrooms across the German capital every week.

Among the most popular events that pay homage to the Roaring Twenties is a series of parties dubbed "Boheme Sauvage," which has grown from a private salon held in the apartment living room of organizer Inge Jacobs to an extravaganza attracting hundreds and featuring swing bands, an absinthe bar and a casino where guests play with Reichmarks.

"The 1920s were really wild. It was a time of tremendous upheaval, in politics, fashion, art and literature it - a real awakening," said the 30-year-old Jacobs.

The period after World War I was marked by extremes in Germany, where the losses from the war led to unemployment, poverty and a rejection of the political establishment. Wracked by uncertainty, many chose to live for the moment.

"We try to recreate this feeling that people had at that time, of dancing on a volcano," Jacobs said.

Since shedding its Cold War divisions with Germany's reunification in 1990, Berlin has emerged as one of Europe's leading tourist destinations, luring nearly 19 million visitors in 2009, many of them attracted to its vibrant nightlife.

The "Boheme Sauvage" parties are held roughly once a month in various locations in the city and attract a crowd ranging in age from 20s to 60s. The core crowd is largely from Berlin, Jacobs said, but roughly 10 percent are tourists. A strict dress code bans all jeans and tennis shoes, but leaves it up to the 400 attendees to interpret the spirit of the times, with period dress encouraged.

Several shops across the capital offer vintage apparel or ensembles cut from vintage patterns featuring knee-length georgette crepe or viscose dress for the women and trousers with suspenders or knickerbockers and a jaunty cap for men.

Andrea Kiersch inherited packets of 1920s-era dress patterns from her grandmother that she uses to make modern versions of flapper dresses that sell for between euro130 and euro300.

Demand is enough for her to make a modest living. Since opening her "Charming Styles" shop eight years ago, she has seen a jump in popularity of Roaring Twenties events.

"I think the reason people go to those parties is because we have difficult times right now and one can see parallels to the past," said Kiersch. "For most of the people, it is a chance to travel back in time, to forget their daily life - and why not?"

Kiersch also helps organize period dances that for many embody the escapism that made the 1920s so attractive.

"The music attracts me very much because it goes straight from the ear into the legs without going through the mind," said Joerg Schneider at a recent Friday night dance.