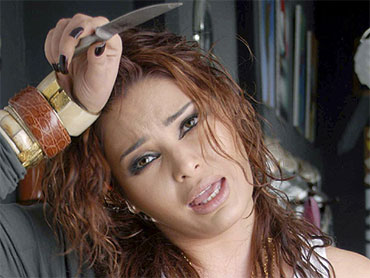 An Egyptian court on Thursday ordered the retrial of a real estate mogul sentenced to death for murdering his former lover, a Lebanese pop star, in a case that transfixed the Arab world.

The 50-year old businessman Hisham Talaat Moustafa was convicted last May of paying a retired Egyptian police officer, Mohsen el-Sukkary $2 million to kill 30-year-old Suzanne Tamim, while she was in Dubai in July 2008.

The Court of Cassation, the country's highest court of appeal, overturned his conviction, prompting cheers and clapping from the billionaire tycoon's supporters in and outside the packed downtown courtroom.

"The court has decided to accept ... the appeal presented by the defendants on procedural and content basis," said Judge Adel Abdel Hamid, who leads the 11-panel judges. "There will be a retrial."

The reasons for accepting the appeal will be issued later. Lawyers argued against the sentence on grounds of faulty procedures, starting from the arrest to details of the Dubai investigation.

El-Sukkary will be retried as well.

"There will be now a retrial. Thank God," said Farid el-Dib, one of nearly a dozen defense lawyers. The defendants didn't have to appear in court. Although regularly in attendance, Moustafa's family were not in court Thursday, which was packed with journalists and security.

El-Sukkary's father jumped in relief. "Thank God we have a respectable judiciary," he said after the verdict.

A lower court will later decide when the retrial will take place. Lawyers say it could be as soon as two months from now.

Experts say it is customary in cases involving death sentences to give the defendants a second chance.

The case captivated Egyptians as it involved a member of an elite often viewed as above the law.

Many had wondered if the 50-year-old real estate mogul tied to President Hosni Mubarak's son, Gamal, and an influential member of the ruling party, would get away with murder in a region where the rich are often thought to be immune.

The court decision to retry the case is certain to raise charges that Moustafa's influence will keep him from the gallows.

Moustafa, a member of parliament's upper house, the Shura Council, was also a member the ruling party's policies committee, which the younger Mubarak chairs.

He is the chair of one of the country's main real estate companies, a family ran business, that continues to flourish despite the trial.

Mustafa's family including wife and sister had regularly attended the court sessions that spanned over 10 months. But on Thursday, the family was absent from the courtroom.

Tamim rose to stardom in the late 1990s on the force of her good looks and voice, but then hit troubled times, separating from her Lebanese husband-manager, who filed a series of lawsuits against her.

Tamim and Moustafa met in the summer of 2004 at a Red Sea resort, according to transcripts of Moustafa's interrogation that were widely published in Egyptian newspapers.She had sought his help to divorce from her husband, according to media reports.

El-Sukkary, the former security officer, said in the transcripts in the trial that Moustafa was "always with Tamim," that he kept a hotel suite for her, and that he took her around in his private jet.

During interrogations, Moustafa said he broke up with his former lover Tamim after his mother opposed the couple's marriage plan. Moustafa, who is already married, comes from a religiously conservative Muslim family.

According to Dubai investigators, el-Sukkary stalked Tamim to her apartment in the swanky Dubai Marina complex and entered using an ID of the management company from which she had recently bought her place.

Dubai police said the killer's face was caught on security cameras - much the way the assassination team accused of being Mossad targeting a Hamas commander in Dubai in January were later filmed as well.

Blood-soaked clothes were found dumped outside the building. The killer had slit Tamim's throat.

El-Sukkary was arrested Aug. 2008 in Egypt. Dubai police traveled to Cairo to present their evidence against him but then turned their attention to Moustafa.

Egypt declined to extradite Moustafa to the United Arab Emirates, insisting he be tried at home. That move was initially read by many Egyptians as opening the door for a slap on the wrist for Moustafa, who built a real estate empire of luxury hotels and resorts and was a leading force behind the pricey Western-style suburbs that ring Cairo.