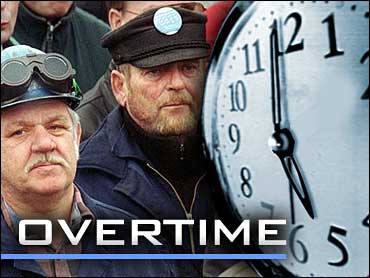 More than 8 million professionals would lose their overtime pay under a Bush administration proposal to change the types of jobs that must receive more money for extra work, says a study by a union-supported think tank.

The analysis being released Thursday by the Economic Policy Institute is among the first to assess how many workers might be affected by the Labor Department's revisions to the overtime rules, which were proposed in March.

Businesses and labor unions agree that the current Fair Labor Standards Act regulations are confusing and antiquated. But they disagree about how to update them.

The Labor Department estimated that under its proposal, at least 644,000 well-paid, white-collar workers would lose overtime pay for working more than 40 hours a week, while 1.3 million lower-wage workers now exempt from overtime would become eligible, or must receive a raise.

Overall, nearly 22 million workers could be affected, though specific jobs and their status could not be determined, officials said.

But the institute says the department "woefully underestimates" the changes that would occur if the proposal is implemented.

In 78 job classifications that the group examined out of 257 white-collar occupations, an estimated 8 million workers would lose their right to overtime pay.

Another 1.3 million people would lose overtime pay under the proposed salary test that exempts all nonmanual workers earning $65,000 or more, regardless of their duties.

Workers covered by union contracts will not be affected.

Labor Department officials say the changes renew the focus on low-wage earners, which the law was intended to protect. Business groups long have complained that the convoluted rules require overtime pay for already well-compensated and highly skilled professionals while ignoring those at the bottom.

Monday is the last day to submit comments on the proposal.