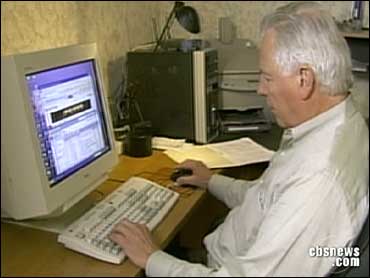 When it comes to customer service, Dan Hoffa delivers. He's a new ambassador for his wife's small natural food business.

"Obviously I've got a little more time to do it now," Hoffa said.

In January, Hoffa lost his job as a technology sales executive in Portland, Ore., along with his six-figure salary, reports CBS News correspondent Ben Tracy. The market plunge wiped out 50 percent of his savings. At age 64, his carefully crafted retirement plan suddenly became obsolete. Hoffa needs to work for at least four more years.

But despite 14 years of sales experience, he can barely get his foot back in the door. Despite applying for about 60 jobs, he's only gotten two interviews.

Hoffa is facing one of the toughest job markets in the country. The unemployment rate in Oregon is more than 12 percent, but he says a bigger problem is another number: his age.

On average, laid off workers age 55 and over are now unemployed for 25.2 weeks versus 20.6 weeks for younger workers, according to the AARP. Employers often worry about older workers learning new skills, their salaries, and how long they'll stay on the job.

"How do you think your appearance strikes these younger hiring managers off the bat?" asked Tracy.

Sue Downes, a laid-off hedge fund employee, thought her looks were dragging down her job search.

"I have these lines," Downes said.

So, the 54-year-old single mom is literally putting her best face forward.

"All of this can be taken care of with Botox," said Dr. Yan Trokel, Downes' doctor.

"A lot of people over 45 are feeling the same way I am, that they're being excluded from getting a job," Downes said.

Experts say older workers are going to need to work longer than they planned.

"Working longer is probably the most potent tool for insuring that you have a secure retirement," said Alicia Munnell, the director of the Center For Retirement Research at Boston College.

Delaying retirement from age 62 to age 67 can boost your savings by 50 percent, turning a $1 million nest egg into $1.5 million, according to the Urban Institute a nonpartisan economic and policy research group.

"I think showing that you're committed to your company and you want to be thought of for advancement, not just treading water, is really important," Munnell said.

So to stay employable well into your 60s, you need to adapt to new technology, don't stop networking, reach out to younger colleagues who could end up as your boss, and stay healthy so you can keep working and avoid costly medical payments.

"When I'm walking in a place for an interview and everyone is 20 years younger, I won't feel at a disadvantage," she said.

And Hoffa feels that he won't be unemployed for long.

"If you stay positive I think good things will happen," he said.

One of those things, they hope, is still retirement.