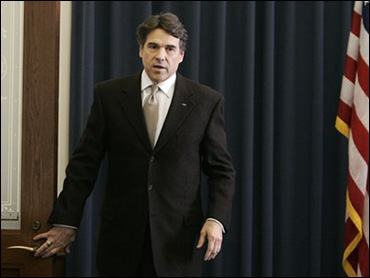 (AP)
White House Chief of Staff Rahm Emanuel has sought to make amends for using the term "retarded" in a pejorative manner after Sarah Palin and others lambasted him for the comment, but now controversy over the word has extended to Texas Gov. Rick Perry's top campaign consultant.

The campaign team for Kay Bailey Hutchison, the Republican senator from Texas running for governor, told CNN that her opponent's campaign consultant Dave Carney inappropriately used the word "retarded" during a conference call last month between the gubernatorial campaigns and a public television station. Carney reportedly used the word repeatedly as they planned out a debate between the candidates.

"That's just retarded," Carney reportedly said on the call with respect to some of the debate logistics. "That's the most retarded thing I've ever heard."

Former Alaska Gov. Sarah Palin, an ally of Perry's (who is shown above), earlier this week criticized President Obama's chief of staff Rahm Emanuel for similar comments and called for him to be fired. Emanuel subsequently held a meeting with advocates for people with intellectual disabilities and pledged to stop using the word "retarded" as an insult.

However, Palin is not asking for Carney to be dismissed from Perry's team, although she did condemn his comments.

"While it seems few can comment on the veracity of the conversation, Gov. Palin believes crude and demeaning name calling at the expense of others is disrespectful," Palin spokesman Meg Stapleton told CNN.

Carney's alleged comments were reported last month by a local blog, which also pointed to an on-the-record statement from Carney in 2007 in which he used the word "retarded" in a pejorative way.

The Houston Chronicle reported, "Dave Carney said speculation that recent decisions by Perry, including his mandate that middle-school girls be inoculated against a sexually transmitted virus linked to cervical cancer, are designed to raise the governor's profile nationally is 'one of the most retarded things about the political observers in Texas.'"

Palin is scheduled to campaign with the Perry team this weekend.