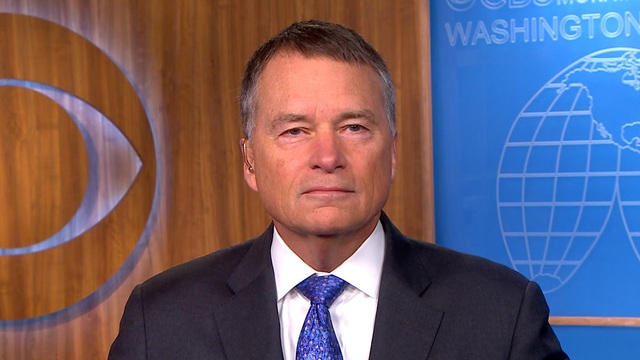 The United States should worry less about how much of its GDP it contributes to military alliances like NATO and more about how those alliances serve to uphold a "global operating system" that has limited violent conflict and boosted prosperity over a number of decades, the nation's former #2 ranking military officer, Adm. James "Sandy" Winnefeld (Ret.), says.

In a conversation with Intelligence Matters host and CBS senior national security contributor Michael Morell, Winnefeld, who served in the United States Navy for 37 years – including at the head of a NATO command and, for four years, as the ninth vice chairman of the Joint Chiefs of Staff – said that, while U.S. partners should "step up and pay a fair share," assuming a leadership position in alliances like NATO also serves an important symbolic purpose.

"There is something called leadership, where, if you want to be the leader of an alliance, it is sort of incumbent on you to contribute the most to the alliance," Winnefeld said. "Otherwise, people are going to turn to somebody else."

Alliances like NATO are "very, very important," Winnefeld continued, "And it's important that we maintain them."

Still, he said, "I do believe that they're at risk right now."

While international institutions and agreements – like NATO, the United Nations and the World Trade Organization – have seen challenges from foreign aggressors in the past, Winnefeld said, he felt growing concern that the integrity of those institutions was being "whittled away" from the inside – by the United States itself. "And that's something that troubles me greatly," he told Morell.

Winnefeld's comments come days after President Trump returned from an annual NATO summit in Brussels, where Mr. Trump openly questioned the value of the alliance and stridently criticized other members about their contributions.

After leaving the summit, Trump boasted that he had won commitments from many member countries to increase their defense spending – though a report issued by NATO in July indicated that contributions by European countries and Canada had been increasing since 2015.

Winnefeld and Morell also discussed the need for the U.S. military to consider changes to its approach to maintaining and growing its capabilities in an evolving security environment.

"[S]trategy is about balancing ends, ways and means," Winnefeld said. "And if you're out of balance in that regard, then you are living with higher risk."

"So if the security environment deteriorates, you either need to trim your ends or you've got to find more means, or you have got to be more clever in your ways," he explained.

Winnefeld expressed concerns about the U.S. military falling into a "Kodak moment trap," in which institutional complacency about preferred ways to fight limits the technologies that the Defense Department explores and invests in. "If you are wedded to wet film technology as Kodak was, and your own engineers see digital photography coming but they just can't get the organization turned around enough – somebody else is going to do that," Winnefeld said. "We cannot afford that as a nation with a military."

Important adversaries like Russia and China, Winnefeld said, have observed the U.S. closely and, in some cases, stolen American technology or else developed their own. "They are not only closing the gap on our symmetric capabilities," Winnefeld said, "they're also thinking out of the box asymmetrically on what are the technologies on which we depend the most and how can they counter those."

As a result, Winnefeld observed, "I think we are out of balance today."

"[O]ur economic power is being eroded, relatively, not in absolute terms. We are seeing our military power being eroded, relatively, not in absolute terms. And we are going to have to face that reality –which means it's going to be harder to achieve the ends that we have always wanted to achieve in this world," he told Morell. "That means that we either have to find more means or more clever ways."

You can listen to the new episode and subscribe to Intelligence Matters here.