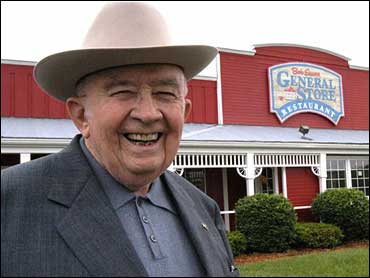 Bob Evans, whose quest for quality sausage to serve the truckers who filled his 12-stool, 24-hour-a-day steakhouse in southeast Ohio led to the creation of a restaurant chain that bears his name, died Thursday, Bob Evans Farms Inc. said. He was 89.

Evans died at the Cleveland Clinic about 12:30 p.m., Evans' family told the company. Bob Evans Farms Inc. said last week that he was being treated at the hospital for pneumonia.

Evans complained that he could not get good sausage for the restaurant that he started after World War II in Gallipolis in southeast Ohio.

Starting with $1,000, a couple of hogs, 40 pounds of black pepper, 50 pounds of sage and other secret ingredients, Evans opted to make his own, relying on the hog's best parts as opposed to the scraps commonly used in sausage. He began selling it at the restaurant and mom-and-pop stores, and peddled tubs of it out of the back of his pickup truck.

It marked the beginning of what is now a restaurant chain with sales of $1.6 billion in the fiscal year ended April 28 with 590 restaurants in 18 states. The company also operates 108 Mimi's Cafe casual restaurants in 19 states, mostly in the West. Its sausage and other products are sold in grocery stores.

"You might say the truck drivers did my research for me," he said. "They would tell me that this was the best sausage they ever had, and then buy 10-pound tubs to take home."

Evans formed Bob Evans Farms in 1953 with five friends and relatives. The chain emphasizes farm-fresh food, cleanliness and service in a homey atmosphere.

"People like to deal with farmers. They like to buy stuff from the farm. They think it's fresher," Evans said in a 2003 interview. "In their mind, it's better and they're willing to pay more for it."