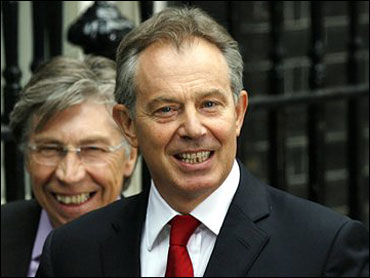 
Don't look now but the long-stalled Middle East peace process just may be getting back on track.

Last week's appointment of Tony Blair as special envoy of the so-called Quartet — the U.S., U N, Russia and the EU — could turn out to be the momentum-booster needed to get things moving again.

Set aside for a moment the many negative indicators, such as still having Hamas in control of Gaza even if it is not playing a leadership role in the newly aligned Palestinian government; or that Israeli Prime Minister Ehud Olmert's hold on power is probably too weak to make any concessions the Palestinians would find meaningful; or that Mahmoud Abbas, the Palestinian president, is seen by almost everyone as lacking the political will to confront Hamas.

Yes, these and other problems are enough that they might sink any efforts at peacemaking. However, there have been a number of positive moments of change in Middle East peacemaking which have come at what one senior Arab diplomat calls "points of weakness," including Egyptian president Anwar Sadat's 1977 visit to Jerusalem.

In any case, the political landscape is not dominated only by negative factors — and Tony Blair is not just any envoy.

Blair's mandate to work on economic reconstruction issues for Gaza and institution building for the Palestinian government recall earlier efforts that floundered. Asked if Blair would be expected to meet with Hamas, a senior State Department official noted Washington was "not envisioning him ... having a particular role with Hamas." Add the fact that Blair does not have a mandate to work the political issues and one wonders (actually many are wondering) how he has any expectation of success at all.

Even though one analyst criticized the Bush administration's approval of Blair's appointment as "another big bell and whistle," there is no question that as a former British prime minister, he enters the minefield that is the Middle East peace process with more clout than any of his predecessors. He also has a positive track record in having brokered a deal between warring factions in Northern Ireland.

And Blair is not alone when it comes to bringing new energy to the process. Moderate Arab states like Egypt and Jordan, which in the past have been reluctant to be out front, are starting to play strong supporting roles. Last week, Egypt's President Hosni Mubarek and Jordan's King Abdullah brought Olmert and Abbas together for a meeting in Cairo.

Secretary of State Condoleezza Rice is expected to make a trip to the region soon in a continuation of her efforts to push Israeli and Palestinian leaders to take steps both to ease immediate problems and also to begin talking about long-term political solutions.

President Bush and his secretary of state are in desperate need of a foreign policy success, and they do not have too many opportunities left. Although he has left his office at 10 Downing Street, Blair, saddled with what many judge to be a negative legacy tied to Iraq, shares the need his friends in Washington have. Thus, tilting at the Israeli-Palestinian windmill becomes a risk worth taking. And so Blair has picked up an open-ended portfolio with limited prospects but still one that has unlimited possibilities, even if every step is straight uphill.