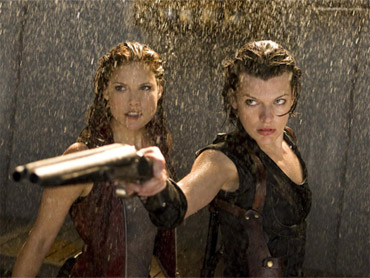 On a weekend that Hollywood was largely content to cede to football and late-summer barbecues, Sony-Screen Gems' "Resident Evil: Afterlife" led the box office.

The 3-D horror film earned $27.7 million over the weekend, according to studio estimates Sunday, a total that exceeded expectations. It's the fourth "Resident Evil" film, all of which have starred Milla Jovovich. This installment opened better than the three previous movies.

"Resident Evil" was the only film in new release on the historically slow movie-going weekend following Labor Day. With an estimated box-office total of $82 million, it was the lowest grossing weekend of the year.

Screen Gems' "Takers," in its third week of release, came in second with $6.1 million. Last weekend's top film, the George Clooney thriller "The American," took in $5.9 million for Focus Features.

With little competition, "Resident Evil" was able to capitalize on the post-Labor Day weekend, when two of the previous entries to the franchise were also released.

"It had all of what its core audience was looking for and more," said Rory Bruer, president of worldwide distribution for Sony.

Bruer credited the marketing of the film and the draw of its 3-D, which he said "was made to be that way." The film also got a boost from IMAX, where it was released on 141 digital screens and earned $2.6 million.

That the fourth "Resident Evil" performed so well suggests that a fifth is likely. Asked if he expects one, Bruer said he didn't know, as it's produced by Constantin Film. But he acknowledged: "It wouldn't surprise me."

Hollywood.com analyst Paul Dergarabedian said the weekend's low performance wasn't reflective of any industry malaise but merely a historical trend. The same weekend last year performed similarly, with Tyler Perry's "I Can Do Bad All By Myself" debuting with $23.4 million.

"This is never known as a high grossing weekend, but it can be the land of opportunity for a film like `Resident Evil,"' said Dergarabedian. "That's turning lemons into lemonade if I've ever seen it."

Next weekend begins the fall moviegoing season in earnest, with releases such as the potential Oscar-contender "The Town" from Ben Affleck, "Easy A," the Emma Stone-starring update of "The Scarlet Letter," and the limited release of "Never Let Me Go," another film being positioned for awards contention.

After a bumpy summer of lower attendance and a crop of disappointing movies, many are glad to see the season come to a close.

"Thank God it's over," said Dergarabedian.