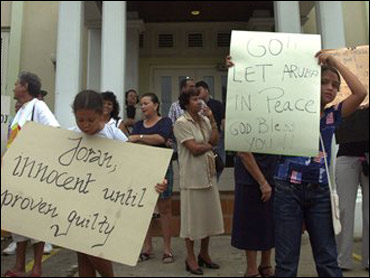 A latent but growing resentment here became evident for the first time when more than 200 people, some wrapped in Aruban flags, said they were incensed by statements made by the mother of a missing American teen.

Those assembled outside the colonial courthouse in this Caribbean capital Tuesday night said they fear their tiny island nation is falsely being portrayed as not doing enough to find Natalee Holloway, the Alabama girl who vanished May 30 on a graduation trip with her high school class.

Two brothers, Deepak Kalpoe, 21, and Satish Kalpoe, 18, who had been held as suspects were released Monday for lack of evidence.

"Two suspects were released yesterday who were involved in a violent crime against my daughter," she said.

"These criminals are not only being allowed to walk around among the tourists and citizens of Aruba," she said, but there were no limits on where they could go.

The protesters took umbrage with those statements.

"Respect our Dutch laws or go home," read one sign. "Innocent until proven guilty," read another. One suggested the missing girl might not be dead but partying in Brazil or nearby Venezuela.

"There's definitely been a crime committed against Natalee. We all know that. When I say involvement, I don't know to what degree" the Kalpoe brothers were involved, she said.

"But I do have information and I know this. Those individuals have information. And I don't think until we find Natalee, we won't know the full extent of their involvement in that crime," Holloway Twitty said.

"There is information that Jug [her husband] and I have that we cannot disclose. But I do know that they have involvement," she said.

Holloway Twitty added that she and her husband "have tried to remain, so respectful and the citizens here have been nothing but respectful and courteous to Jug and I since we've been on the island. And I hope that that is not something that is growing. And we never meant for this to happen."

The protesters also complained that some American television coverage unfairly depicted the island, which depends overwhelmingly on tourism, and as being crime- and drug-ridden.

Though poverty is widespread in the Caribbean, Aruba has an unemployment rate of less than 1 percent and one of the higher standards of living. And it has few worries. Tourism and a major refinery bring in the money. Diplomatic and defense needs, such as they are, are provided by the Netherlands.

"Have you been treated badly in Aruba?" asked Ramon Garcia, a burly tourist guide. "We are together with the family of Natalee, but we love Aruba too, man. We don't need these pressures. We are a friendly island."

Orlando Flanigan said his country had given "all out hearts, all out cooperation, everything," to help find Natalee. "It's time we got some respect back," he said.

"They are making us look like a banana republic, he said. "We are an educated and cultured people, many of us speak four or five languages."

John Maywether told a growing crowd that Aruba is not an island of criminals. "We have 96 (prison) cells and 53 percent of them are occupied by non-Arubans," he said.

"We are here to ask that you trust our legal system," he said, recalling that Arubans turned out in large numbers for Natalee after she vanished and that prayers were offered for her safe return in local churches.

Arubans note that local banks raised $20,000 and provided other help to a group of volunteers from Texas, who are still here, could continue their search for the girl.

But there has been no sign of her. Three F-16 jets sent by the Dutch government were to start flying grid patterns on Wednesday, taking offshore photographs hoping for clues.

On Monday the courts extended for 60 days the detention of Joran van der Sloot, 17, the son of a judge-in-training, the only person still in detention and possibly the last person to see Natalee Holloway alive.

After that time he can be released, ordered to trial or detained further.

Lincoln Gomez, an Oranjestad defense lawyer not connected to the case, said the Kalpoe brothers still could face indictment until they are formally notified that charges won't be brought.