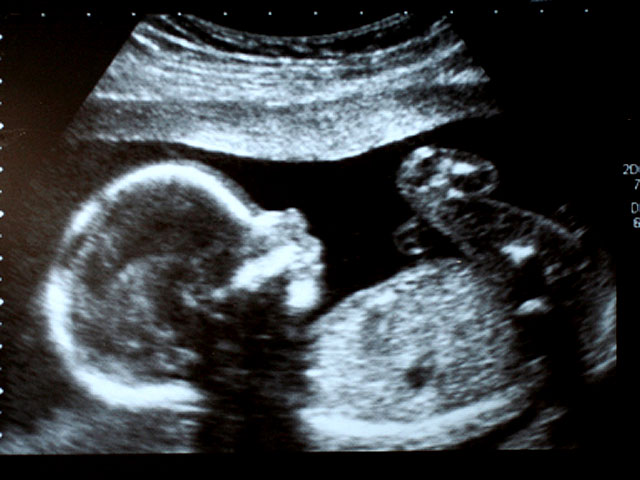 (CBS News) Scientists have successfully mapped the genome of a baby in the womb by giving mom a simple blood test and dad a non-invasive saliva swab. They hope their test could one day serve as an alternative for riskier, more invasive methods currently used to determine whether an unborn child is genetically predisposed to disease.

But the success of the new method also raises many ethical questions because the less-invasive test that has potential for widespread use one day.

Scientists at the University of Washington collected blood samples from a woman at about 18 weeks into pregnancy and then took a saliva specimen from the father. They used a newly developed technique to determine which genetic variants would pass from the mom to the child. To test the accuracy of their genetic predictions, the researchers collected blood from the baby's umbilical cord at birth. The scientists found they were 98 percent accurate in their predictions. The technique also detected 39 of a baby's 44 de novo mutations, new mutations in the fetus that weren't originally present in the mother. These mutations have been tied to autism, epilepsy and other conditions.

Scientists had already known a pregnant woman's blood contains DNA from the developing fetus starting a few weeks after conception. Based on that, many researchers are developing blood tests as alternatives to invasive procedures that tap fluids from the uterus, such as a blood test that looks for three copies of  the 21st chromosome to diagnose Down sydrome. But this new method provides an entire genome map and assesses more subtle DNA variations in the fetus' genome, down to a one-letter change in a DNA strand.

"The improved resolution is like going from being able to see that two books are stuck together to being able to notice one word misspelled on a page," study author Jacob Kitzman a graduate student genetic researcher at the University of Washington, said in a news release.

They also successfully repeated the method for another expectant couple closer to the start of their pregnancy. Their findings were published in the June 6 issue of Science Translational Medicine.

"This work opens up the possibility that we will be able to scan the whole genome of the fetus for more than 3,000 single-gene disorders through a single, non-invasive test," said study co-author Dr. Jay Shendure, an associate professor of genome sciences at the University of Washington, said in a statement. Although each specific inherited disorder is rare and affects about one percent of newborns, the serious nature of these diseases often calls for special medical attention.

Some parents with a family history of a genetic disease, or those who know they are a carrier of a disease-associated gene, sometimes turn to procedures like an amniocentesis or chronic villus sampling to determine if their unborn child was passed the disease. But the procedures can be risky.

According to the Mayo Clinic, amniocentesis may lead to miscarriage  - between 1 in 300 and 1 in 500 miscarriages occur from an amniocentesis in the second trimester - needle injury to the baby, leaking amniotic fluid that causes orthopedic problems for the baby, a condition called Rh sensitization in which the baby's blood gets into mom's bloodstream and the mom's immune system produces antibodies against the blood cells.

In chorionic villus sampling, tissue is taken from the placenta and is analyzed to find chromosomal birth defects, such as Down syndrome, Tay-Sachs disease and sickle cell anemia, WebMD reported. Risks are similar to that of amniocentesis, and include cramping, amniotic fluid leaking, miscarriage, Rh sensitization and in rare cases arm or leg birth defects once the child is born.

Shendure cautioned to HealthDay however that widespread application of the study is still a ways away, and the findings should be viewed as "proof of concept" that a non-invasive analysis of a fetal genome is possible. Shendure said interpreting the fetus' entire genome will remain an enormous challenge, and much more research is needed.

But the findings are already raising ethical concerns over whether parents may selectively abort a fetus based on the information from the test.

"There are some scenarios that are extremely troubling," said Marcy Darnovsky, associate executive director of the public interest group Center for Genetics and Society, in Berkeley, Calif., told The New York Times. The tests will spur questions on "who deserves to be born," she said.

Dr. Arthur Caplan, predicted to ABC News the advances "will be among the most controversial forms of testing ever to appear in medicine as the debate over abortion and disabilities both shift to whole genome genetic testing."