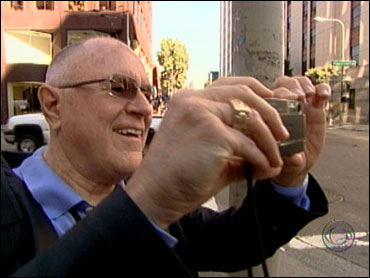 For computer researcher Gordon Bell, even his morning walk to work is part of a grand experiment in digitizing and remembering everything, CBS News correspondent John Blackstone reports.

He wears a little camera around his neck that takes a picture every 30 seconds or so. A sound recorder rolls non-stop.

At 71, Bell's own memory is still good. But he's now saving his whole life on computer, from childhood certificates to all his medical records. Memories make life richer, he says.

"I can retrieve everything I ever heard, seen or done forever," Bell says.

"There's at thing about this system that having everything is so ... important," Bell explains.

The system he's working on for Microsoft would help people easily record and recall their entire past. "Our focus is to try to make it as useful as possible," Bell says.

Why use your own brain for storage, he figures, when computer memory has become so cheap. Fifteen years ago, a gigabyte of memory cost $1,000. Today, it costs less than $1.

One gigabyte can hold the content of 1,000 novels. He says he would tell young people to "absolutely" never throw anything away.

If Gordon Bell and his research team are successful, we may one day have instant recall of everything without actually having to remember anything. Consider that next time you're about to hit the "delete" button.