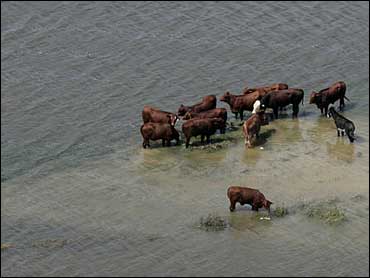 Rescuers used skiffs to take flooded-out residents to safety along the hurricane-stricken Texas-Louisiana coast Monday, and the U.S. Army sent out Blackhawk helicopters to find thousands of cattle feared trapped in high water.

Hurricane Rita's death toll climbed to seven when the bodies of five people were discovered in a Beaumont apartment.

The five — a man, a woman and three children — apparently were overcome by carbon monoxide from a generator they were using after the hurricane knocked out the electricity over the weekend, authorities said. The children's aunt discovered the bodies after going to check on the group.

Elsewhere, life began getting back to normal following Hurricane Rita's arrival over the weekend as residents streamed back to the Gulf Coast.

Traffic into Houston was reported moving smoothly again as hundreds of thousands of Hurricane Rita evacuees returned home. There were reports of congestion Sunday, but more traffic lights were back in commission and traffic was said to be moving well into the city.

CBS News correspondent Steve Futterman reports there are virtually no power problems in Houston, gasoline is readily available and stores are reopening.

A long line of customers waited outside a downtown Starbucks as it reopened for the first time. Customers sat outdoors with their drinks, despite hot, humid weather.

To the east, however, where Rita came ashore, it was a different story. There was still no power in Beaumont and Port Arthur and residents were being told to stay away. Although Interstate 10 was open through the area, all exits were closed as emergency officials tried to keep the damaged, flooded cities sealed off to all but emergency vehicles.

"Until we get power back, its unsafe for people to be living here," said Port Arthur police officer Nathan Mingo.

"A lot of our production comes from the Gulf and when you have a Hurricane Katrina followed by a Hurricane Rita, it's natural, unfortunately, that it's going to affect supplies," the president said after a briefing at the Energy Department.

Staring at the ground, shoulders stooped, clearly exhausted, many came back with stories of deer stuck on levees and cows swimming through seawater miles from the Gulf of Mexico.

Driving into the town of Henry in Vermilion Parish, Jerome Guidry noticed his house wasn't where it was.

"My house is in the cane field," moved off its foundation by the floodwaters and swept 500 feet away into his sugarcane fields, he told CBS News Correspondent Cami McCormick. "Oh, my God!"

His fields are also swamped now, with saltwater.

In Cameron Parish, just across the state line from Texas and in the path of Rita's harshest winds, fishing communities were reduced to splinters, with concrete slabs the only evidence that homes once stood there. Debris was strewn for miles by water or wind. Holly Beach, a popular vacation and fishing spot, was gone. Only the stilts that held houses off the ground remained.

"In Cameron, there's really hardly anything left. Everything is just obliterated," said Louisiana Gov. Kathleen Blanco, who has asked the federal government for $34 billion to aid in storm recovery.