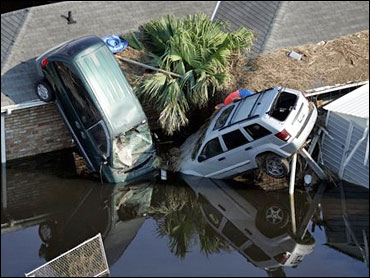 The floodwaters that caused so much misery and death in New Orleans were being pumped back into Lake Pontchartrain as rescue crews from as far away as California trolled the evacuated city for stragglers and authorities braced for the eventual death toll.

"I said thousands. Some computer models say 10,000. I don't know what the number is. But it's going to be big. And it's going to shock the nation," New Orleans Mayor Ray Nagin said on CBS News' The Early Show.

Nagin said it could take about three months before New Orleans is back in business.

The U.S. Army Corps of Engineers began pumping water out the flooded city Monday after closing a major gap in the levee that burst during Hurricane Katrina, flooding 80 percent of the bowl-shaped city.

Efforts to evacuate holdouts were stepping up Monday, with boat rescue crews from around the country searching for people to rescue.

"In some cases, it's real easy. They're sitting on the porch with their bags packed," said Joe Youdell of the Kentucky Air National Guard. "But some don't want to leave and we can't force them."

"Long as they keep bringing food and water, we can hold out 'til this water goes down," Kenny White told CBS News.

The city's police chief is begging them to come in and get out.

"There is absolutely nothing here. We advise people that this city has been destroyed. It has completely been destroyed," said Chief Warren Riley.

In the New Orleans suburbs, there are the earliest signs of returning life, reports CBS News Correspondent John Roberts. Cleanup crews are clearing tree clogged streets. The power companies are putting the lines back up. The handful of gas stations open for business have lines that last for hours. And in some places, people are beginning to trickle back home.

Draining the flood waters is likely going to take weeks, leaving behind a layer of toxic sludge — and bodies. The mayor said it wouldn't be "unreasonable" to have the city's death toll reach 10,000.

In neighboring St. Bernard Parish, officials expressed frustration that federal aid, slow to reach New Orleans, was even slower to get to outlying areas.

"This is Day 8, guys. Everything was diverted first to New Orleans, we understand that. But do you realize we got 18 to 20 feet of water from the storm, and we've still got 7 to 8 feet of water?" said Ron Silva, a district fire chief. "If you had dropped a bomb on this place, it couldn't be any worse than this."

In addition to help from other Louisiana and Alabama departments, a Canadian task force of firefighters and police arrived four days after the storm to help, St. Bernard Fire Chief Thomas Stone said.

"If you can get a Canadian team here in four days, U.S. teams should be here faster than that," Stone said. Pointing to two large oil refineries, "When they're paying $5 to $6 a gallon for gas, they're going to realize what this place means to America."

The frustrations also were being felt along the Mississippi coast, where people who have chosen to stay or are stuck in demolished neighborhoods scavenge for basics each day.

"I have been all over the world. I've been in a lot of Third World countries where people were better off than the people here are right now," retired Air Force Capt. William Bissell said Monday. "We've got 28 miles of coastline here that's absolutely destroyed, and the federal government, they're not here."

The scope of the misery inflicted by Katrina was evident as President Bush visited Baton Rouge and Poplarville, Miss., his second inspection tour by ground.

"Mississippi is a part of the future of this country and part of that future is to help you get back up on your feet," Mr. Bush told 200 local officials.

While in Louisiana, the president tried to repair tattered relations with the state's Democrat governor, Kathleen Blanco, while also praising relief workers. Blanco played down any tension.

"We'd like to stop the voices out there trying to create a divide. There is no divide," she said. "Every leader in this nation wants to see this problem solved."

"What happened here should never, ever happen again in this country. And I think we ought to do some analysis, and not just play the blame game," Nagin said. "Too many people suffered both during the storm, but way too many suffered after. And they suffered and they died. And it didn't have to happen."

"This type of catastrophic event requires quick action, and the bureaucracy did not allow that to happen," Nagin added.

Health and Human Services Secretary Mike Leavitt declared a public health emergency for Texas, saying it would speed up federal assistance to help almost 240,000 storm evacuees — the most of any state.

Federal officials on Monday dubbed Arkansas' Little Rock Air Force Base the hub for all disaster-related overseas air shipments. The base is one of the few in the mid-South equipped to handle large cargo planes and is a seven-hour drive to New Orleans.

The leader of troops patrolling New Orleans declared the city largely free of the lawlessness that plagued it in the days following the hurricane. And he angrily lashed out at suggestions that search-and-rescue operations were being stymied by random gunfire and lawlessness.

"Go on the streets of New Orleans — it's secure," Army Lt. Gen. Russel Honore said to a reporter. "Have you been to New Orleans? Did anybody accost you?"