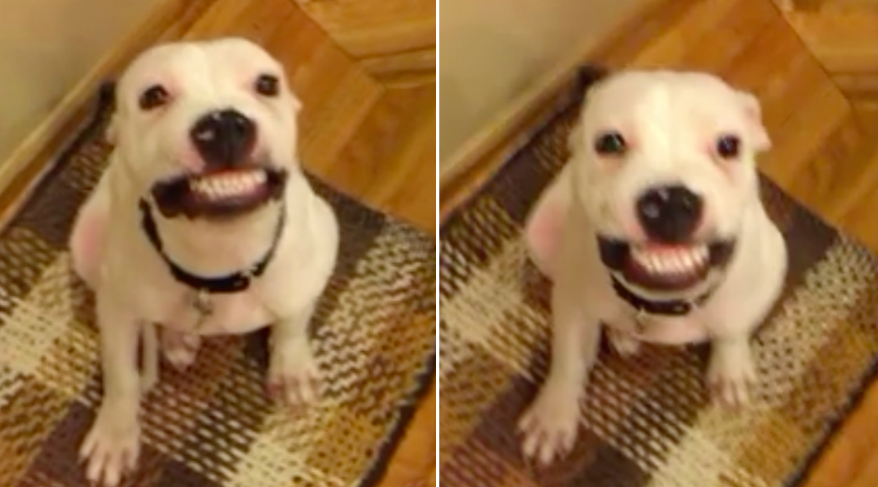 When parents tell their toddlers to smile for the camera, it's nearly impossible to snap a good photo.

But 5-month-old Herbert is a pro.

The American Staffordshire Terrier puppy has no problem flashing a forced smile when his foster mom tells him to, "Say cheese!"

He's even more motivated when he's actually offered a piece of cheese in exchange for a big grin.

A Facebook video of the dog's trick went viral, receiving more than 412,000 shares and 14 million views, after it was posted by his foster mom Amanda Robles on Monday.

"In the video, they were holding up some cheese and got him to smile," Colleen Toole, chief communications officer for PAWS Chicago, told CBS News. "It wasn't something that he came to us being able to do."

Herbert was rescued from Chicago's Animal Care and Control just days before Christmas.

The city pound didn't have any information on Herbert's past; the only thing Toole knows: he's very friendly and affectionate.

"Because of his smile, I don't think he will have a hard time finding an adopter," Toole said. "Obviously it's very funny. We're glad people can take joy in that -- but the larger joy you can give an animal is giving them a permanent home."

For now, Herbert is enjoying spending time with his veteran foster family.

"We're happy that he's in a home and getting better -- that's the biggest thing for us is happy to see an animal doing well and knowing that we're able to save him," Toole said.

The puppy is going in for a medical check Sunday. If veterinarians clear him, Toole hopes he'll be available for adoption next week.