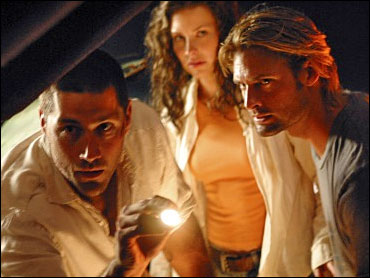 The good news: The plan hatched by our "Lost" friends to call for help actually worked.

The bad news: They may be in deeper trouble than before.

Wednesday night's season finale of ABC's adventure-mystery was terrific, a two-hour testament to being careful what you wish for (even when things seem to go right for the "Lost" crew, they actually get worse).

This season was often slow-moving and unfocused. But the powerful season-ending episode redeemed the series with the shrewdness and intrigue that made it so addictive in the first place. It will be a long wait for smitten viewers until early 2008, when "Lost" comes back for its fourth season.

Spoiler alert: Go no further if you don't want to know what happened in the finale.

The latest opportunity to get off the island had presented itself with the parachute arrival of Naomi and her satellite phone, which could contact a freighter just a few miles offshore.

But two obstacles remained: Rousseau's tape-loop plea for help, which had aired nonstop for 16 years from the island's radio tower and was blocking any sat-phone calls. Worse, the infamous Others were jamming all radio signals from an underwater lab.

Last week, Charlie volunteered to make the perilous dive to the submerged station and disable the jamming device — despite Desmond's premonitions that the excursion would end with Charlie drowning.

Nothing ever happens as expected on "Lost," of course. But despite unforeseen complications, rock star Charlie (played by Dominic Monaghan) shut off the jammer, as he hoped. Then, as predicted, he drowned.

For a while, it appeared that three other regulars — Jin, Sayid and Bernard — were also on the show's hit list: They were taken prisoner during the Others' beach raid, and were thought to have been executed. But by episode's end they were alive and free.

Meanwhile, the main group, led by Jack, made the journey to the radio tower, where Rousseau's message was successfully silenced.

But then, as Naomi attempted to place the sat-phone call to the ship, she was stabbed to death. The killer was none other than Locke, who long ago "went native" and has sabotaged efforts by his fellow plane-crash survivors to flee the island.

Locke's appearance was a surprise: Two episodes ago, viewers saw him shot and left for dead in the jungle by Ben, leader of the Others.

When Jack retrieved the phone from the fallen Naomi, Locke aimed a gun at Jack, threatening to kill him, too, if he made the call.

"You're not supposed to do this," Locke said.

Naturally, none of the survivors bought his argument.

Nor had they believed Ben, arriving moments earlier to implore Jack not to place the call. Naomi wasn't who she claimed to be, he warned Jack. She was "one of the bad guys."

"If you phone her boat," declared Ben, who has been known to lie for his own purposes, "every single living person on this island will be killed."

But Jack completed the call. It seemed that help was on the way.

That is, unless Ben and Locke were right that alerting the boat was a grave mistake — a fear that viewers were starting to share.

"I'm telling you," Ben said, "making that call is the beginning of the end."

Maybe Ben was telling the truth. And with the narrative cutaways throughout this episode, "Lost" may have signaled a shift into a new phase next season, positioning the saga for its end: Instead of the customary flashbacks, viewers for the first time got a glimpse of the future.

And that future guarantees there's life after the island.

The scenes focused on Jack, in miserable shape in Los Angeles. A lost soul, he was drunk and drugged out, barely able to function. When his eye fell on a newspaper story that reported someone's death (just who, the viewer didn't learn), he was nearly driven to suicide.

Then, in the closing scene, he met up with Kate, for whom he seemed to be carrying a torch. Pathetically, he told her he makes a practice of taking airline flights — hoping that the jet will crash and put him back where he thinks he belongs.

"Every little bump we hit, I actually close my eyes and pray that I can get back," he said. "We made a mistake. We were not supposed to leave."

"Yes, we were," Kate said sternly.

"We have to go back, Kate!" Jack said in despair.

Viewers, left mystified and tantalized, won't be able to go back to "Lost" until next year.
By Frazier Moore